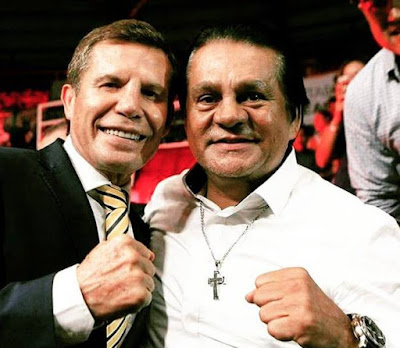 Julio Cesar Chavez on the left, Roberto Duran on the right. Two bona fide Latin Legends in boxing but so much more than that. Two of boxing's finest that would have rose to greatness in any generation.

They never fought each other; age wise, weight wise and otherwise, the timing was all wrong. Chavez' star was rising as Duran was winding down his own career (though he did fight longer than he should have). together, they have a combined total of 234 fights.

In many ways they were made for each other. Both were at their absolute best when facing an opponent that wanted to fight. They would have no trouble finding each other.

If only there really was a mythical and mystical pound for pound Netherland where all the greats could meet and face each other in their natural prime and at their best weight without losing anything in the process. Instead, we are left to wonder.

Had they fought I'm convinced that it would have been Duran's hand that would be raised in victory. At his peak, Chavez was near impossible to knock out. If I remember correctly he was born with an abnormally thick skull. A curse for his opponent but a blessing for Chavez. I don't believe Duran could knock out a prime Chavez. With respect to Chavez, I think Duran had the better overall arsenal. Neither man was easy to hit but Duran  mastered the defensive nuances better than Chavez.

Duran was an underrated but masterful counter puncher and I think this would be the key to a win over Chavez. Duran had his own left hook but Chavez had one of the great left hook in boxing period, what has generally become known as the "Mexican Left hook". Still, as Duran has proven throughout his career, he can take it.

Chavez captured the Super featherweight, lightweight and super lightweight divisions and was one of the most exciting fighters of his era. He beat the best of his era, including, Hector Camacho and Meldrick Taylor (a clear cut victory as far as I'm concerned). Chavez fought to a highly controversial draw against Pernell Whitakerfor the welterweight title. (He lost). He moved up one weight class to many.

I always had a house full of friends and family when these two fought. They gave us their all and the gave us our money's worth! It pleases me to see both of them enjoying their retirement.
By Randy De La O at October 03, 2017

Roberto Duran is the man!

I have found that this site is very informative, interesting and very well written. keep up the nice high quality writing. Best Welterweight Boxers

Canelo vs Jacobs live on DAZN

It was really insightful.
Thanks for such a nice content.
Cheers
BTW if anyone interested more have a look theshoesfinder thanks

Thank you for sharing us education, please kindly visit mine :D

The slim case with a thickness of 7.2mm and the gray dial with sunburst pattern are eye-catching dress watches that meet Chopard's special requirements.replica watches uk One is the L.U.C 96.09-L self-winding movement, which is the symbol of in-house manufacturing (with a 22K gold micro rotor and 65 hours power reserve), and the case material uses 18K rose gold obtained by process mining. In addition to the COSC chronometer certification,replica omega which is a standard of accuracy, the company has also obtained the strict Fleurie Quality Foundation (FQF) certification. The model combines design, technology and performance, and produces only 250 points.

Thanks for sharing this nice blog. And thanks for the information. Will like to read more from this blog.

Thanks for sharing this nice blog. And thanks for the information. Will like to read more from this blog.