Marquez celebrates after stopping Diaz in the 9th round 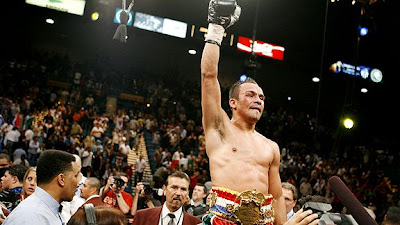 If you are going to win a fight, Baby this is the way to win, and if you are going to lose a fight, this is the way to lose, going down swinging, with your boots on. No quit in either one of these guys. It doesn't get better than this. It's hard to believe that Marquez was able to weather the storm. Diaz was aggressive throughout the fight. In the first round, he came out with bad intentions. It seemed personal for Diaz. Maybe it was Marquez' stinging remark about Diaz "He's 50% Mexican and 50% American,.... I'm 100% Mexican". Say what you want but Diaz is 100% fighter. You can't take that away from him.
Marquez for his part showed why he is at the top of everyone's list as a pound for pound champion. Is it any wonder Manny Pacquiao won't fight him for a third time. This is what boxing is all about. This fight had it all. For Diaz' part there is no shame in losing, in what may end up being the fight of the year. against a fighter who is working his way toward legend status. With this win Marquez makes his case as the pound for pound king

It was a very good fight. I thought Diaz had the advantage early with the volume of punches seeming to overwelm Marquez at times. But, throughout the fight Marquez was the sharper more accurrate puncher. I thought Marquez really started to control the action in the 5th round. Diaz had slowed his attack allowing Marquez to really sit down on his punches and pick him apart. You could see Diaz weakening and Marquez get stronger and more confident as the fight moved into the middle rounds. Diaz should watch the film of this fight because he'll see how he was countered by a skillfull champion and he can learn alot from watching a great fighter like Marquez.

Scott, that was a great assessment of the fight. Both guys showed tremendous heart but Marquez showed why he is an elite champion. It's pretty hard not to be in 100% agreement on this fight. They should all be like this.