I saw these two photos making their way around the internet. Both of them include my friend Bill O'Neill. I thought they were both interesting enough to merit a caption or an explanation of the photos. I emailed Bill and he was kind enough to provide a caption for both photos. Thank you Bill. 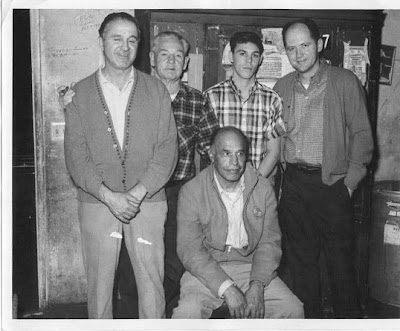 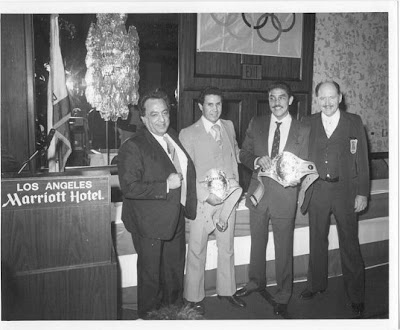 Bottom photo: Jose Sulaiman came to the World Boxing Hall of Fame banquet the year I was president of the organization (1984), to belatedly present WBC championship belts to Rodolfo Gonzalez and Mando Ramos. The belts had been won 10 years earlier, but got overlooked, and laid around in the WBC office in Mexico City for all that time. Sulaiman said he would bring them, providing we allowed him to make a "brief" speech. So he came--and BORED EVERYONE TO DEATH for almost 30 minutes, until I persuaded Jimmy Lennon Sr. to cut him off.
By Randy De La O at March 24, 2009

What does anyone know about Freddie "Mexicali Rose" Merino? (I know it's Merino and not Marino because I am from the same Merino family.) Any cool info, or pictures, or stories would be greatly appreciated!!