The Company You Keep - By Roger Esty 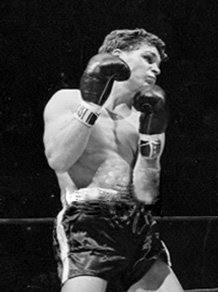 The little I saw of Denny Moyer at the end was food for thought. I wasn't that involved with boxing in San Diego. I hung around the various gyms on occasion and would go to the fights on a pretty much weekly basis. I knew some of the fighters. Not well,but enough where they recognized me and we could talk. I guess for whatever reason when Sid Flaherity came to San Diego he brought with him Denny Moyer. The big fight venues were gone. After losing to Monzon for the title,San Diego was as good a place as any to wind things up for the kid with the baby face. Besides, Flaherity had opened a camp in the foothills for what he had left in his stable of fighters. It was also the home for his kennel of Malmutes.

When I saw Denny Moyer up close for the first time,I could see the age on him. The saggy chest and shoulders. The softness in his body. Then when I'd see him drink,i knew it was more than fighting and age that made him look older. Older and slower. More prone to opening up his cuts. It was all he knew how to do to make a living I guess. He had enough in him to beat the bums. But when he found a character like Ronnie Wilson, abstinence was out of the question.

I was in my early twenties then. My direction wasn't well focused. When I was invited ,I liked getting drunk with those fellows.
"I got drunk with Denny Moyer. Used to be the Champ."
Big deal. Flaherity should have told Denny to stay away from guys like me. The thing is Sid probably was telling him that for years. Old habits are hard to break. Maybe Malmutes are more dependable. Sid probably never had to worry about his dogs going on a binge.
By Randy De La O at March 21, 2009