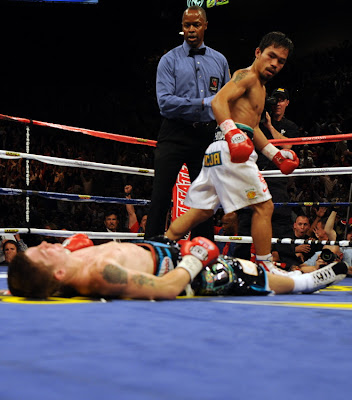 By Randy De La O
First Ricky Hatton: A game rooster if ever there was one. His heart cannot be questioned. While he was in the fight, which was very brief, he fought valiantly. The old adage "You can't teach an old dog a new trick" was never more evident than in last nights fight. I don't think it would have made one bit of difference in the outcome but he should have spent more time working on his own assets instead of trying to change his style, especially before such a big fight. I give Hatton all the credit in the world for coming out and facing Paquiao and an imminent knockout. Mayweather Sr showed great courage sending his fighter out for the second round.

His first mistake was trusting Floyd Mayweather Sr, who had no real answer for Pacquiao's speed, power and angles. Freddie Roach said before the fight "I have the better fighter" and he was right.

On Manny Pacquiao: I don't know what I can say about Manny that I haven't already said, or that hasn't already been said by almost everyone else. Pacquiao is a force of nature. There's no doubt that Paquiao would fit into any era. He joins the ranks as an all time great, and deservedly so. The ease and quickness in which he figured out Hattons flaws was amazing. After the first knockdown it was a foregone conclusion. The knockout, which came near the end of round 2, was a debilitating left hook to Hattons chin. Hatton was out. It was a serious knockout. The kind of knockout that causes damage. Thankfully Hatton was able to get up and walk out of the ring on his own.

The knockout sends a message to both Floyd Mayweather Jr. and Juan Manuel Marquez who will be fighting each other later this year, on July 18. Marquez, who has already fought Pacquiao twice and has been pushing for a third fight, has to notice the improvement that Manny has shown over the last year or so. Both fights between the two were controversial, with a split decision win for Paquiao and a draw, which says a lot about Marquez. A lot of people, myself included felt Marquez was the winner of both fights. Whatever happened in the past though really doesn't matter. Marquez will be facing a vastly improved and infinitely more confident Manny Paquiao.

Mayweather on the other hand, has also stopped Ricky Hatton, back in December of 2007. He didn't have nearly the easy win that Paquiao had. We'll have to see how that plays out. The winner of the Marquez vs Mayweather jr. will more than likely face Pacquiao.

An awesome fighter. I think he'll have too much for Mayweather if they meet up later this year.

I do not expect to see Mayweather-Pacquiao;I DO expect Marquez to end louthmouth...whoops..Mayweather's comeback.

Well said Randyman we knew Hatton's style was custom made for this to happen..... I see Pacquiao fighting Mosely in the near future setting up the 3rd fight with Marquez. I know most people will give an edge to Mayweather in their fight but i believe that his boxing style will not serve him well as an aged inactive fighter. Marquez's style fades slower with age than a boxing style. I predict Marquez in 9 for that fight and a close fight between Pacquiao and Mosely with either a 7-5 round decision for Pacquiao or a late round KO.

Scott, Brian, I hope you guys are right on this one. Marquez has become one of my favorite fighters over the last few years. I would like to see him get his rubber match Paquiao.