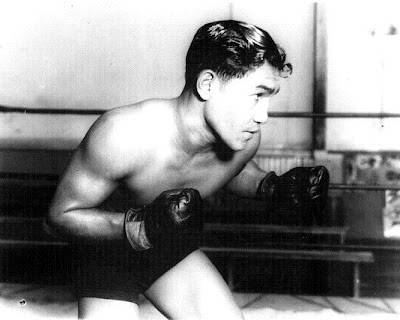 Those of us who were around California boxing back in the 1930s can never forget the ability, the boxing class, the scrapping nature of Bobby Pacho, a Yuma, Az. lightweight who broke into the pro ranks while working as a farm mechanic in El Centro, Ca.

The BoxRec archives show him being from Cleveland, Ohio. Not so. Nor did he start as a pro in 1929. His early bouts, most of them at El Centro, Ca., took place in 1928, some of which he fought as Kid Mexico. I have his early bouts somewhere among my debris; when I ferret them out I will credit them accordingly.

Bobby's record at first sight is nothing to excite one. But in reality the lad had two careers----one early on, when he showed a lot of promise ending in the mid-1930s, and the sunset years, when he became more of an opponent than a stellar attraction. His arc seemed to peak when he pressed Champion Barney Ross to the limit in L.A. in defense of his Jr. Welter Title in 1934.

Bobby was but one of a wealth of fine lightweights active at time in our state. Cecil Payne, Hector McDonald, Tod Morgan, Yg. Peter Jackson, Frankie Klick, Goldie Hess, Kenny LaSalle, Johnny Lamar, and Santiago Zorrilla kept things hummng in the division. And Pacho stood above the lot by winning the state title from Tod Morgan in 1931 before losing it to Yg. Peter Jackson the following year.

He was managed by Bert Morse, who was also Baby Arizmendi's first manager, ahead of Cal Working.

He was my great uncle. I only met him as a little girl. He was in his 60s by then. I had heard stories of his boxing days from my mother and her sisters. The Pacho family all hailed from Yuma, AZ.

He was my grandfather, known as Papa as we grew up we heard his stories of his boxing days from him and my father Robert Pacho Jr.