The Welterweights I remember . . . 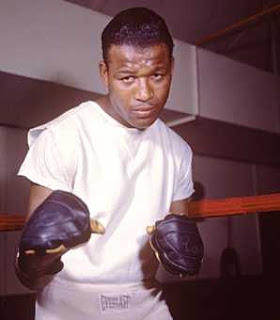 
The Welterweights I remember . . .

They were guys who usually stepped up from lower weight classes, like Jose Napoles. Napoles was a lightweight who fought junior welters, and finally won the 147 lb. title at what was considered the "end" of his career.

We were a little light in the number of world titles available when guys like Mantequilla, Homicide Henry and the "real" Sugar Ray ruled the 147 pound division. There was only ONE title, and only one guy got to claim it.

Napoles, Armstrong and Robinson never looked down in weight when considering challenges.
Well into his 30's, about fifteen years into his career, Napoles had exhausted all of the welter challengers of his era, and it was a great era. He didn't look down in search of a blown up featherweight to fight, he challenged an all-time great middleweight champ in his prime, Carlos Monzon.

Robinson stepped up to middleweight and won the title five times. Many consider him the best ever, all-time P4P (in contemporary boxing fan lingo?)

Ray also stepped up and challenged Joey Maxim for the light-heavy crown on a hot summer night at Yankee Stadium.

The intense heat and weight disadvantage did Robinson in late in the fight. I never heard of Sugar Ray challenging Chalky Wright. He didn't look down to see what the little guys were doing.

Armstrong was a little guy, I doubt weighed much more than 132lbs when holding every title between 126-147. Armstrong had to go up and down, and still defended the welter title a record 18 times in less than two years. He whipped Ceferino Garcia in a title defense.

Today, I communicated with another pretty good welter champ, he held the title three times, his name is Emile Griffith. Griffith had won and lost the welter title, re-winning it twice. Like other greats, he'd dominated the welterweights then stepped up to win the middleweight title twice.

Emile told me he'll be at the WBHOF banquet again this year. He'd be coming with his son, Luis, and will also bring James "Bonecrusher" Smith. I was pleased we were speaking for reasons not related to the WBHOF, I almost hesitated telling him I was involved with the organization.

Just a few seconds ago, I hear Jim Lampley scream with excitement that Floyd Mayweather Jr. "IS BETTER THAN EVER!!!!"

I truly believe that Mantequilla Napoles would have looked better than ever had he fought men two divisions below has natural weight class, instead of two above.

To bring things a little closer to present, a few years back another welterweight champ, Sugar Ray Leonard, demanded all the edges and usually got them. However, Sugar Ray Leonard fought bigger men as his career progressed, not the smaller.

Floyd Mayweather looked sharp tonight. Of course he did. He wasn't in the ring with Shane Mosely. That's who he should have fought.
The problem with Shane Mosely is obvious. He's too much man for a guy who calls himself "Money".
By Randy De La O at September 20, 2009