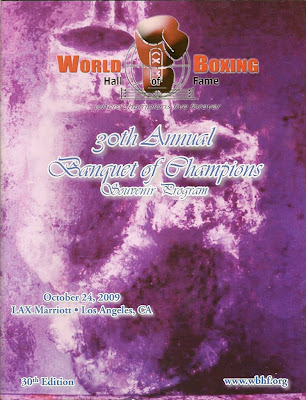 
Jeri and I attended the World Boxing Hall of Fame Banquet at the Lax Marriott last weekend and met up with our friends, Frank and Connie Baltazar, Roger and Maria Esty, Rick Farris, Dan Hanley Jr and his "Pops" Dan Hanley Sr and Ed Hernandez.

Frank was being honored for his lifetime of hard work in SoCal boxing, receiving the first Johnny Flores award. It was a big night for Roger Esty, as well. His amazing art work graced the cover of the Hall of Fame program. It was a great accomplishment for both of them. Rick Farris was our host and his attention to detail made for a great night not only for our group but for the event as well.

There were quite a few fighters attending the Banquet, guys like James "Bonecrusher" Smith, Tony "The Tiger" Lopez, Loreto Garza, Gil King, Gaspar Ortega, Rodolfo "El Gato" Gonzalez, Bobby Chacon, Danny "Little Red" Lopez, Yaqui Lopez, Mando Muniz(President of the WBHF) and last but not least, Rafael Herrera, Brian Mitchell, Orlando Canizales and Lucia Rijker, who were being inducted that evening. Boxing announcer and analyst Al Bernstein was there to receive his induction as well.

All the fighters got their proper accolades that night but it was Lucia Rijker that stole the show. From the moment she left the dais and returned to her seat she was swarmed by fans asking for photos or autographs. It was big night for her.

After the banquet was over we all went to Champions Sports Bar which is located inside the Hotel. It seemed the logical place to go.

The next morning we had breakfast with Roger and Maria Esty and Gaspar Ortega and his wife Ida. It gave us a chance to get to know Gaspar a little. Like most exfighters he was humble and unassuming.

It was a great weekend spent with some great friends. I'm looking forward to next year.
By Randy De La O at October 31, 2009