MARCIANO, MOORE and THE INSIGHT OF HARRY KESSLER

[Author's Note:  This essay was written circa 1999-2000, before the advent of You-Tube, and got its impetus as part of an on-going web-site dialogue where everything imaginable was being printed as gospel truth in terms of assessing the merits of fighters.  Therein lies the backdrop for the reasoning behind the creation of this essay --- the rest is history. Craster was someone whose name I did not know, one of many individuals and characters who spoke what they no doubt believed to be true --- espousing solipsistic platitudes to the bitter end.  However his beliefs, as I recall, were rather benign and mild compared to many on that site.]

Craster Writes:   Marciano was floored by Moore in rd 2 and when he got up he wasn't in control of his senses!  That is a fact nobody can change or hide, it is also a fact that RM got the usual gift from the ref in that he got a full 8 count when the rule didn't apply, for he had jumped up with loose legs at the count of 2.

Bardelli Response:  Oh brother, is Mr. Craster on a mission to destroy the accomplishments of Rocky Marciano as is evident from this post and several others!  Please, Mr. Craster, go back and look at the fight!   And, I write these words as both a long time admirer of both Rocky Marciano AND Archie Moore.  I'll share some of what I've written about Moore and the greatness of Mr. Moore in its proper forum --- now is not the place nor time for doing so.

[Note:  This critique/analysis was written before any of us heard of U-Tube.  I am throwing it in for the reader's convenience ... as a footnote to the analysis.]

Before submitting this response, I did just that, i.e., watched the fight in its entirety, simply because I could not believe what you had written about the fight. I have heard these stories before and the source of the "facts," as you deem them to be ... and in reporting  these "facts," ...  derive from the Old Mongoose himself. You are simply reporting what Archie Moore had to say in rationalizing his personal annihilation!


Oftentimes, because they have such strong egos and cannot fathom the concept of defeat, fighters have to
justify or rationalize why they were defeated. If they don't, then their self-image is dealt a severe blow and
this impacts upon their ability to be an effective fighter.  In other words, a defeat always has to be explained
away and there has to be a reason. Very rarely will you hear a fighter say in an interview that "the other guywas better tonight." No, there has to be a justification, an excuse, a rationalizing of the defeat. As Ernest
Hemingway wrote in The Old Man and The Sea, "Man can be destroyed but he cannot be defeated."

When Marciano was floored by Moore for the count of one, perhaps two, Marciano arose and gave absolutely no indication of showing a lack of "control of his senses," as you state, from which anyone could conclude, as you are trying to do, that he was ready to go, implying that if Moore could have got to him quickly,  Marciano would have been knocked out.

It is true that Marciano was hit with a titanic shot by Moore and the punch was a punch of the kind and nature which would have also dropped lesser fighters who would not have arisen from the scrap heap of ashes. However, Rocky Marciano was not a lesser fighter.  He did not know the taste of defeat.  On rising,  Marciano's sense of balance and equilibrium was fully intact.  He did not stagger nor lean up against the ropes --- nor did he appear, outwardly, to be incapable of defending himself in any manner, shape or form. He responded to the referee, Harry Kessler, who did not give Marciano a standing 8 count, --- as Archie Moore maintained happened.  In fact, Kessler didn't even wipe off Marciano's gloves when he arose following a count of four, an event, had it happened, which would have benefited Marciano by giving him more recuperative time. To the contrary, however, Kessler's actions of not wiping Marciano's gloves, benefited Moore whereupon Kessler then motioned for the fighters to continue their battle. 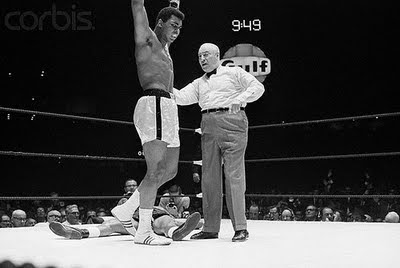 Referee Harry Kessler was fight referee for many great fights. Here he is in the Ali-Williams Houston encounter

Any poster can watch the unfolding of events and reach their own conclusion as to who is reporting fact and who is reporting fiction.  The full story might not be told and/or the viewing misconstrued. Additionally, I suggest an interested party also read or listen to the words of Harry Kessler from his memoirs concerning the Marciano-Moore fight, as set forth in his biography, Million Dollar Referee. At the outset, in covering the fight, therein, Kessler describes Moore landing a right hand shot to Marciano's jaw --- and then continues his description:

"Marciano got up at the count of four. * * * Marciano on the canvas in round 2 stunned the house. The mostsurprised person was Rocky Marciano. Even more astonished perhaps was Archie Moore when Rockyquickly stood up! Here the Mongoose had hit his man with the most powerful punch he had landed in morethan 20 years of barnstorming the country and taking on all comers, often just for eating money, and the guydidn't stay down! Such a thing should not have been possible and certainly did nothing to bolster Moore'sconfidence in himself. If Rocky could survive his best shot ever, what would it take to pack him in?" 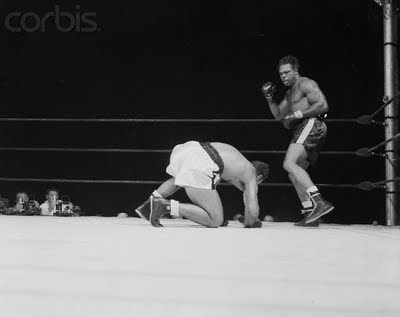 Moore floored Marciano in the second round 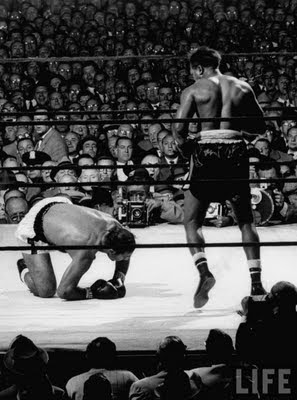 "I didn't bother to wipe Marciano's gloves on my shirt before I waved them back to combat; that early in the drama there was no resin on the canvas. Archie hesitated a couple of seconds before he came in. Maybe he was still reflecting on the impossible rise of a Rock who should have been down and out; maybe he was remembering the right he had caught in the stomach before he decked Marciano."

Kessler then describes the fight and the eventual knockout of Archie Moore in the ninth round. Kessler
continues in his biography:

"I have shown a film of [the fight] hundreds of times when lecturing to foundry organizations, service clubs or charitable groups." * * *

"After [Archie Moore] had gone home to San Diego and had nothing better to do one day, Archie came up with the idea that I had protected Rocky Marciano after Archie had knocked him down in the second round!  According to the ancient one, I gave Rocky an extra two seconds count after he had resurrected himself from the canvas. The film disproves Moore's charges."


"It shows that Moore went to the far corner. I gave Marciano a normal count and when he got up, I gave the two of them the signal to begin mixing it up again. Archie Moore moved in -- but with a slight hesitation.  Remember--he had taken a strong shot from Marciano before he put the champion down. I suspect he may have been a tiny bit reluctant to charge in too quickly!"

"Contrary to protecting Marciano, I probably did Rocky a disservice when I purposely dispensed with wiping his gloves on my shirt after the knockdown. It would have given him another second or two to recover!  I was criticized by one sportswriter for my failure to do so but there wasn't enough resin on the canvas that early in the fight to make any difference. Maybe the reporter had a point. So did I: Rocky's gloves were not dirty."

"Archie's on going lament has reach me at infrequent intervals over the years. * * *

"Several months after the fight, Rocky and Archie met while changing planes at the Newark, New Jerseyairport. * * * [T]heir dialogue went this way:

Rocky: "Arch, I keep hearing that you're raising hell that Harry Kessler protected me in the ring! You knowI knocked you out fair and square! I don't need anybody's protection! Why don't you get off Harry'sback?"

Archie: "Well, Harry's a friend of mine and I just want to say that to build publicity for a return match. Harrydon't mind!"

Kessler from his autobiography:  "But I do mind, Archie! And if you read it here, I wish to hell you would cease and desist!"

Kessler and his brother had a part in Moore's introduction to the world of boxing when Archie was 13 years old in St. Louis, Missouri at a time when Kessler had refereed about 25 of Moore's fights as an amateur and a pro in the St. Louis area. Kessler suspects that Moore was upset because he thought Kessler should have been more favorable to Moore. Kessler retorts: "I never favored anyone in the ring."Craster Pushes On: You forget to add that the great beating Marciano gave Moore in rds 6-9 came from mainly low blows that brought AM's hands down and exposed his head.


Bardelli Responds: If you are interested in complaining about fouls, I submit that you dedicate a post to cover Evander Holyfield's 8 or more fouls of Mike Tyson in their second fight, with nary a warning or a point being taking away by Mills Lane, despite protests being lodged by Tyson's corner and by Tyson himself following his receipt of the multiple flagrant fouls inflicted by Holyfield.  All of this, of course, lead Tyson to resort to the primitive and the law of the jungle as he responded as an enraged and wounded animal would and should, under the circumstances --- regrettable as Tyson's response was since this was a professional fight governed by rules prohibiting flagrant fouling. 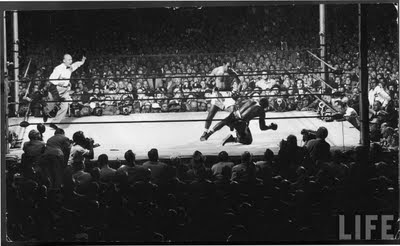 To the contrary in the Marciano-Moore fight, Archie Moore was not fouled throughout the fight let alone during the 6th, 7th, 8th or 9th round.  Furthermore, Moore, to my knowledge, never claimed he was fouled by Marciano. The media never claimed it.  Now if your understanding of fouling is making a man age before one's very eyes, in the ring, as the fight continues round after round, and the beating gets more severe with each ensuing round, then, yes, Marciano did foul Moore ... and plenty!   But in the conventional sense, no, Archie Moore was not fouled in this fight. 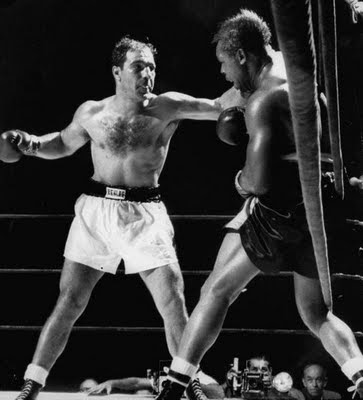 Marciano pouring it on before dropping Moore for good 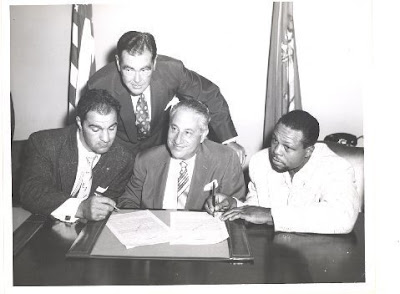 I feel that your lack of understanding of what happened in this fight stems from (1) your failure to review the fight film, (2) your susceptibility to believe what Archie Moore had to say about why he lost the fight [rationalization] without looking at the film, (3) an inherent dislike of Marciano's ruggedness and capability of manhandling his opposition which you somehow interpret as fouling tactics, or (4) a combination of each of the noted basis. 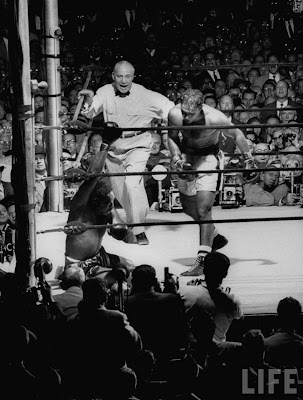 
Harry Kessler started refereeing fights in 1927. By conservative estimate, he donated over $200,000 tochildren charities from his referee earnings before he retired as an active referee.   Refereeing was a pastime and not a vocation to him as he owned a large company and he was its metallurgist --- by all accounts, Kessler was a pre-1950's millionaire.   As Kessler stated,  "I never favored anybody in the ring!"  Indeed, it does a great disservice to the history of boxing and the memories of either Rocky Marciano and Harry Kessler, to revise history by reporting what is not factual and all of boxing suffers from it --- including the reputations of the principals involved in this September 1955 epic encounter --- Rocky Marciano, Archie Moore and Harry Kessler.
by John A. Bardelli
By Randy De La O at November 05, 2009