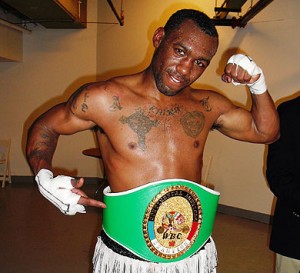 Austin Trout (21-0, 13 KOs) of Las Cruces, New Mexico defeated hometown fighter Taronze Washington (13-11, 7 KOs) last night in Dallas, Texas to win the WBC Continental Championship of Americas. Trout won the fight via a 12 round decision by 120-108 on all three of the judges cards.

"The fight was a one sided affair, with Washington throwing a flurry of punches then going up against the ropes in a peek-a-boo defense, where Austin would score the majority of his points. Austin is excited about capturing his 3rd belt in 2009 and gaining a spot for a future world title fight. We’d like to thank everyone for the support you’ve given us !"...Louie Burke
By Randy De La O at November 06, 2009

Congratulations to Trout in winning the WBC Continental Championship belt