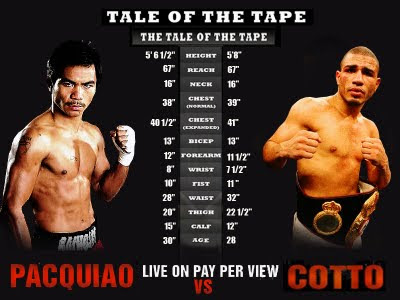 When the fight between Manny Pacquiao and Miguel Cotto was first announced I thought, maybe Manny was  bitting off more than he could chew. My first thought was that Cotto was going to be too big for Pacquiao but now looking at the tale of the tape I'm not so sure. The difference between Cotto and Pacquiao is minimal at best. At the very least, in this fight, I don't think size or moving up in weight is going to be a factor. At this point in time Manny has grown into a natural welterweight, which makes Cotto's decision to spot Pacquiao a few pounds a little foolish. If  Cotto does win this fight it will be because he is the better fighter, not a bigger one.

If I have one beef against Pacquiao, and it's not a small one, it's the concessions he asks for when moving up in weight. I don't recall reading about any concessions in weight given to Henry Armstrong, Alexis Arguello, Julio Cesar Chavez, Roberto Duran or any number of all time greats. If you want to move up in weight and challenge the champion of that weight than fight that man at the division's weight or to my way of thinking there will always be an asterisk next to the "W", and deservedly so.

Pacquiao's camp is so confident of victory that they have a fight for Manny scheduled for a yet to be determined opponent on March 13th of next year. I still go by the old adage my father would toss at me from time to time, "Be confident, don't be overconfident".  Probably easier said than done considering Pacquiao has been riding a wave of high profile victories and has not lost since his first fight with Mexican great Erik Morales in March of 2005. Prior to that Pacquiao had not lost a fight since September of 1999 when he was knocked out in the 3rd round by Medgoen Singurat.

Manny Pacquiao has proven himself to be an all time great, and he would probably be a factor in any era. Still his career has not been with out some controversy, specifically his two fights with Juan Manuel Marquez, a draw in 2004 and a split decision in March of 2008. Those two fights have been discussed ad naseum and I won't rehash them here and I bring them up only to show that, contrary to popular belief, Manny Pacquiao is a human being. maybe not like you and I, but still a human being. The other argument is that Manny  fought some of his most spectacular fights against fighters that were either on the down side of their careers; Marco Antonio Barrera and Erik Morales or completely past their prime, as was the case with Oscar De la Hoya. There is some merit to those claims.

Having said that, Pacquiao has been a phenomenon in the world of boxing. His energetic, nonstop punching style and his ability to continually learn and improve, makes you wonder how he would have held up against guys like Henry Armstrong, Julio Cesar Chavez or Roberto Duran.

Miguel Cotto has the ability to win this fight. The biggest question coming into this fight is: has Cotto recovered from the savage beating at the hands of Antonio Margarito? Which begs the next question: Were Margarito's gloves loaded? Either way, it was a beating that could come back and haunt him in a moment of crisis in the fight with Manny Pacquiao, and there will be many moments of crisis in the fight with Manny. That's a given.

Cotto was on his way to a Pacquiao like following by Puerto Rican boxing fans and by boxing fans in general, prior to his loss to Margarito. His biggest wins were over; Carlos Quintana, Paul Malignaggi, Zab Judah and Sugar Shane Mosley and most recently Joshua Clottey.

Cotto has the style to make this a great fight and possibly win, he is an aggressive boxer/puncher that was out boxing Antonio Margarito in their fight last year. Which again begs the question: Were Margarito's gloves loaded? It's shame that we even have to ask that question.

I don't like making predictions anymore but lest I look like a wimp and risk an asterisk next to my name, I'm going to predict a close, hard fought decision win by Miguel Cotto. While I don't think Pacquiao is biting off more than he can chew I do believe Cotto can and will win this fight. Sometime when a fighter is soaring at his highest he gets his wings clipped and sometimes a great fighter, having lost it all, and desperate for redemption can make a comeback worthy of the ages.

That being said let the best man win!

..another non-wimpout vote for Cotto.

I guess you made a wrong prediction...UPACKMAN

Yeah, I guess I did but if you read a little further down the article I also "Let the best man win" and he did.

You win some and you lose some and that's the way it goes.

When I make a prediction I put my name on it. I don't hide behind an anonymous signature.

"I'm going to predict a close, hard fought decision win by Miguel Cotto." not even close, pacquiao scared the hell out of him and run all the way to 12th round