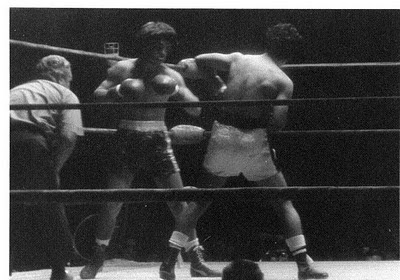 It was a tough fight.
We both got busted up pretty good in an eight-rounder.
I finished with a broken nose, left eye swollen shut, cut over right eye. I urinated blood most of the night.
And those little bumps you never hear about all over your head from butts, elbows, etc.
My pale English/Irish skin had glove and rope burns here and there.

That was the most damage I suffered in a bout, and I won a unanimous decision.
Mel Epstein was in the corner that night, along with Johnny Villaflor. Johnny took care of the cut, Epstein was blind.
In the drssing room afterwards, my father unlaced my shoes as I rested on a table.
The doctor had left the building to accompany a boxer to the hospital that had been KOed in the main event.
I was "out on my feet" in the shower. Thought I'd just stepped in before Mel told me I'd been in for 15 minutes. Get out of there!

Mel was left to close the cut. Dr. Jack Useem had left the building. As I mentioned, Mel was legally blind.
Thank God the old bastid didn't own a needle & thread.
He bitched and moaned while attempting to create a "butterfly" using tape and gauze.
Mel's hands shook like a Parkinson's patient. He was angry the doctor had left. I assure you I certainly wasn't pleased.

As Mel bitched thru the procedure. He condemned me for my "Saturday Night Special" (Mel's reference to my being over-sexed.)
Mel had no idea that less than 48 hours before the match, I was carried out of a bar over the shoulder of my buddy, a former USC running back.
I was so drunk, and so badly affected, that what should have been an easy win turned into a nightmare. I took a lot of unneccesary punishment.

I was twenty years old that night. Had been fighting pro for more than two years.
Mel told me before we entered the ring that night . . . "You ain't right. I can see in your eyes, you ain't right!"