This is for Smoking Joe Frazier. 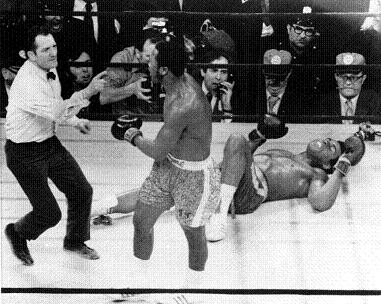 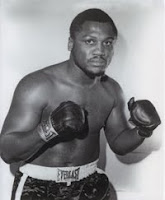 Joe, I became a fan of yours on May 4, 1967 when you beat ScrapIron Johnson in 10 at the old Olympic Auditorium in Los Angeles. This was the first time I saw you fight. ScrapIron was a tough guy. You impressed the hell out of this seventh grader. You impressed my father too and he was not so easily impressed. I knew you were something special. You proved me right when in your very next fight you KO’ed one of the toughest man to ever lace up a pair of gloves, George Chuvalo, no easy feat but you did it in four.

Over the next few years you ran up a string of victories against guys like Buster Mathis, Mexico’s Manuel Ramos and a second win against the Argentinian Bull, Oscar Bonavena. You beat one of my favorite fighters, not once but twice when you stopped West Coast favorite “Irish” Jerry Quarry in both fights. I admired the way you stayed out of the heavyweight tournament, content with the New York state version of the heavyweight title, knowing all along that your day was coming. You never doubted yourself.

Your next fight, a fifth round KO of the great Light heavyweight Champion, Bob Foster, sealed the deal and “The Fight of the Century” was set. I believe to this date it was the most anticipated fight of all time. I couldn’t wait.

I was still in high school when that fight took place. I have to be honest, I was as much a fan of Muhammad Ali as I was of Smoking Joe Frazier but I did know one thing. Smoking Joe was going to win this fight. I bet my weeks lunch money on you, five bucks. I knew that the man I saw beat ScrapIron did not know how to lose. Granted, Scrap Iron was no Ali but I knew that you had the right stuff inside you to find a way to win. You didn’t disappoint. You were great that night Joe, about as great as any heavyweight champ in history. I can’t imagine how you felt that night. Both of you made history that night, two legitimate undefeated heavyweight champions with a rightful claim to the title facing each other. You came through that night Joe. You had a heart the size of the moon and it didn’t let you down.. You were King of the world that night Joe! That bum I bet the five dollars with never did pay me but it didn’t matter, you gave me bragging rights too.

You never left anything in the ring Joe, your heart and your style didn’t permit it. You fought like a man Joe, no one can ever question that. Sometimes though, as they say, styles make fights and George Foreman had the right style, that’s life. We can’t always choose when we are going to lose but we can choose how we lose. That Smoking Joe heart kept you from staying on the canvas. When I look at the tapes of that fight I am always moved by your courage, and your big heart.. There was no quit in Joe Frazier. You faced him again a few years later. Not many would have faced Big George a second time.

You would meet Ali three times in total but it was the third fight, the “Thrilla in Manilla” that would once again cause the world to stand still and hold it’s breath while you and Ali would meet at the Araneta Coliseum in the Philippines, again making history in what many consider the greatest heavyweight fight in history.

You had a career to be proud of Joe and you gave fight fans like me a thrill that has lasted a lifetime. You always carried yourself with pride and distinction and made your family proud. I remember that era, possibly the greatest in heavyweight history and I remember Joe Frazier. You stood head and shoulders above the rest. You were one the fighters that inspired me to become a boxer.

Thanks for the memories Joe.


Note: Joe Frazier will be at the Pechanga Resort and Casino, February 12, 2010, to meet and greet fight fans and sign autographs, Scheduled to fight the main event that night are Lightweights Tyrone Harris and Korean Ji-Hoon Kim. The fight will be shown on ESPN Friday Night Fights. For more on that fight and that night go here.
By Randy De La O at January 11, 2010

Contemporary boxing pales in comparison to the Golden 60's and 70's. Back then, there were men who fought with all the skill and passion that they could muster. And Joe Frazier outshone all with his indomitable fighting spirit and everlasting heart.

How many men would WILLINGLY rise up from the canvas after being knocked down SIX times by George Foreman? Or face a rematch?
And most of all, Frazier was master of quite possibly the greatest left hook in heavyweight history (Joe Louis would only be the serious challenger).

One day, a statue of Joe Frazier will be in Philadelphia instead of a fictional boxer from a movie that's CLEARLY modeled after Frazier.

I also hope we get to see a movie about Frazier. It's a travesty that the FIRST man to defeat Ali has NEVER been given his dues as a fighter, a champion, and even as a man.