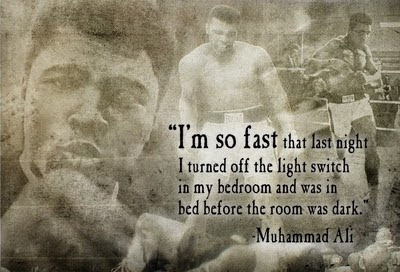 "A man who views the world the same at fifty as he did at twenty has wasted thirty years of his life."

"If you even dream of beating me you'd better wake up and apologize."

"It's lack of faith that makes people afraid of meeting challenges, and I believed in myself."

"Life is a gamble. You can get hurt, but people die in plane crashes, lose their arms and legs in car accidents; people die every day. Same with fighters: some die, some get hurt, some go on. You just don't let yourself believe it will happen to you."

"My toughest fight was with my first wife."

"My way of joking is to tell the truth. That's the funniest joke in the world."

"No one knows what to say in the loser's locker room."

"Service to others is the rent you pay for your room here on earth."

"There are more pleasant things to do than beat up people."

"To be able to give away riches is mandatory if you wish to possess them. This is the only way that you will be truly rich."

"We have one life; it soon will be past; what we do for God is all that will last."

"When you are as great as I am it is hard to be humble."

"When you can whip any man in the world, you never know peace."

"A rooster crows only when it sees the light. Put him in the dark and he'll never crow. I have seen the light and I'm crowing."

"Hating people because of their color is wrong. And it doesn't matter which color does the hating. It's just plain wrong."

"I am the astronaut of boxing. Joe Louis and Dempsey were just jet pilots. I'm in a world of my own."

"I hated every minute of training, but I said, "Don't quit. Suffer now and live the rest of your life as a champion."

"I know I got it made while the masses of black people are catchin' hell, but as long as they ain't free, I ain't free."

"I know where I'm going and I know the truth, and I don't have to be what you want me to be. I'm free to be what I want."

"I never thought of losing, but now that it' s happened, the only thing is to do it right. That's my obligation to all the people who believe in me. We all have to take defeats in life."

"I wish people would love everybody else the way they love me. It would be a better world."

"He who is not courageous enough to take risks will accomplish nothing in life."

"I am the greatest, I said that even before I knew I was."

"I figured that if I said it enough, I would convince the world that I really was the greatest."

“Champions aren´t made in the gyms. Champions are made from something they have deep inside them - a desire, a dream, a vision.”

“Only a man who knows what it is like to be defeated can reach down to the bottom of his soul and come up with the extra ounce of power it takes to win when the match is even.”

One of the finest player ever...You can watch the Video tribute here...

Muhammad Ali, I don't think there will be a single person who is not a fan of him. Great man he was and great sportsperson..

Nice information, valuable and excellent design, as share good stuff with good ideas and concepts, lots of great information and inspiration, both of which I need, Very good points you wrote here..Great stuff...I think you've made some truly interesting points.Keep up the good work.
car removal hobart
car buyer hobart

Wonderful blog post. This is absolute magic from you! I have never seen a more wonderful post than this one. You've really made my day today with this. I hope you keep this up!
car removal gympie
cash for cars gympie

I have read your excellent post. This is a great job. I have enjoyed reading your post first time. I want to say thanks for this post. Thank you.
best car removal brisbane
best cash for cars brisbane

Thanks for sharing such a great piece of content. It really helps me and clears so many thoughts running in my mind. Besides, I'm from Pakistan and curious to know
cash for flood vehicle

Truly, this article is really one of the very best in the history of articles. I am a antique ’Article’ collector and I sometimes read some new articles if I find them interesting. And I found this one pretty fascinating and it should go into my collection. Very good work
Car Removal Wollongong