Rodolfo Gonzalez vs. Ruben Navarro I 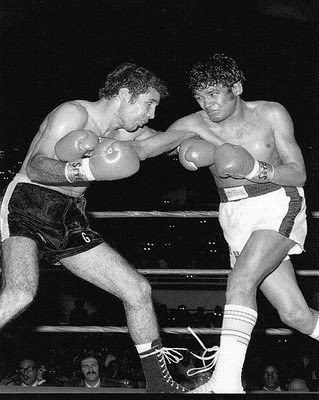 "El Gato" vs. "The Maravilla Kid". This was an important bout between two top lightweight contenders.
WBA Champ Roberto Duran had been offered $75,000. to fight the winner in a title defense.

In a very close match, both fighters were cut, with Gonzalez keeping Navarro on the ropes much of the fight. In the end, Gonzalez was awarded a majority decision by the officials who scored the bout as follows: Chuck Hassett 4-4, John Thomas 5-4, Rudy Jordan, 4-3.

The title match with Duran never materialized for Gonzalez, who's stablemate Mando Ramos would lose the WBC title to Chango Carmona shortly afterwards. Ramos had been beaten badly and KOed by Carmona, who offered Gonzalez a shot at the WBC crown in his first title defense. Four months after edging Navarro, Rodolfo Gonzalez destroyed Carmona in twelve rounds to win the WBC crown. Like a true champion, Gonzalez agreed to defend his title against the deserving Navarro.

Eight months after the contest pictured above, El Gato and The Maravilla kid would meet again, only this time with a world title on the line. Ruben had won three straight after losing to Gonzalez, but at the Los Angeles Sports Arena on March 17, 1973, El Gato would dominate the Maravilla Kid.


Here is the Boxrec account of the Gonzalez-Navarro WBC Lightweight title bout:

"In the first two rounds Ruben peppered the jab but Gonzalez casually slipped the weapon with bob and weave tactics and then rocked Navarro back on his heels with jolting left hook counters. By the 3rd round Gonzalez was beginning to catch the challenger on the ropes with solid combinations, which immediately caused an ugly mouse to form beneath his right eye. Aggressive but never awkward, Gonzalez managed to connect constantly with punches ranging from hooks to right uppercuts, while Ruben could land nothing in return. At last conceding that the jab was not the proper strategy, Navarro, 133, decided to try and club his foe in close. That wasn't the answer either. Strong as an ox, Rodolfo, 135, out-muscled Navarro with few difficulties and seemed almost bored in the process. But, although his eye was closed and his lips were caked with blood, the scrappy Navarro refused to give up until Referee George Latka took matters into his own hands at 2:33 of the 9th round." -International Boxing, August 1973 issue

"I worked my ass off for this fight, but I just couldn't do anything. I don't know what the hell went wrong. He didn't hurt me but he humiliated me. He's 1000 percent improved since he won the title and I don't see anyone beating him for a few years." -Ruben Navarro
"I felt I was on top all the way. Actually I was pacing myself for the full route, but as it turned out, I got to go home early." -Rodolfo Gonzalez
Attendance: 16,146 Gate: $192,755
By Randy De La O at January 20, 2010