A Mini Reunion and a Night at the Fights 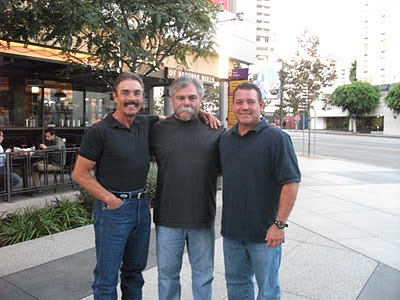 My cousins Louie and Rocky Burke, from Las Cruces, New Mexico,  are in town for this weekends fight at the Staples Center in Downtown Los Angeles. Rocky is New Mexico's number one referee and one of the best in the country.  Louie is the trainer of Antonio Escalante, of El Paso, Texas, who will be facing Daniel Ponce De Leon in a WBO title elimination bout on the undercard of the Sugar Shane Mosley vs Sergio Mora fight. According to Louie, Antonio is in "great shape and confident".  De Leon the former WBO Super Bantamweight Champ is looking to restake his claim as the best in his division, Escalante, on a ten fight winning streak has plans of his own. Since blood is thicker than water, I'll be rooting for Escalante.

The Fight between Mosley and Mora should be a good one.  Mosley suffered a humiliating defeat at the hands of Floyd Mayweather Jr. in his last fight and has been somewhat inconsistent and shown signs of old age. Still his experience and huge heart make him a dangerous fighter at any time. Mora on the other hand, a former  "Contender" Champion and WBC Light Middleweight Champion, has never quite reached the level enjoyed by Mosley. Mora won and lost the title from the late Vernon Forrest in 2008 and Forrest has two big wins over Mosley. Make of that what you will. 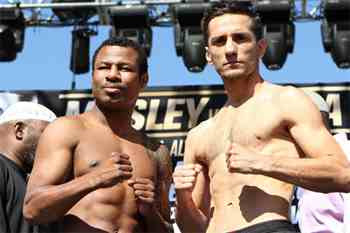 Mora has good boxing skills and if he can utilize his jab and reach and not be suckered into a "fight" by Mosley, he might have a chance to win. The timing of the fight and Mosley's age are on his side. Still, for me, this is a toss up. As always, let the best man win.
By Randy De La O at September 18, 2010

I managed to miss the fights,but I read the results...your take on Saul Alvarez?

Alvarez looks like a future great, especially when you consider that he is only twenty years old. He just might be the guy that will make everyone forget about Pacquiao and Mayweather.