Sugar Shane Mosley vs Sergio Mora: It's a (Boring) Draw 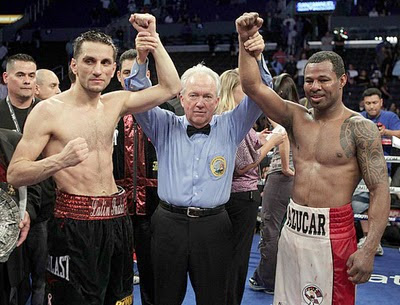 It was a tough loss for El Paso’s Antonio Escalante Saturday night at the Staples Center in Los Angeles. Escalante was stopped in the third round of their scheduled twelve round WBO Title elimination bout. I thought Escalante was holding his own against De Leon before he was stopped.  Going into the fight, trainer Louie Burke had some concern over Escalante having some trouble making weight. That may have been a factor in the fight.  Escalante showed some promise in this fight and one loss, KO or otherwise is not the end of a career. The best remedy for a loss is a little rest and then back to the gym.

De Leon still has some fight in him and is now the mandatory challenger to world featherweight champion Juan Manuel Lopez.

I have to admit, I didn’t think too much of Victor Ortiz before this fight, and I’m not exactly a fan just yet  but I have to give him some credit  in his effort to redeem himself after quitting against Marcos Maidana. Everyone deserves a second chance. Ortiz handled himself well against the veteran Harris, though to be fair, Harris has seen better days and I don’t think he gave Ortiz the kind of fight that would have answered some questions about Ortiz. In other words this was the perfect fight for Ortiz to shine. To his credit Ortiz took a few good right hands from Harris in the fight and shook them off as he continued to press the fight. Harris was Ko’ed in the third round. The jury is still out. 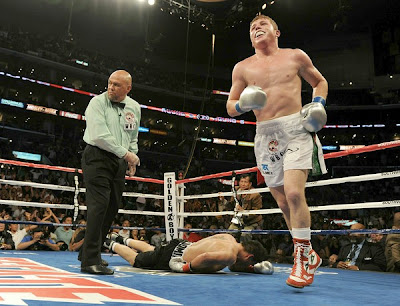 I couldn’t help mentioning to my pal Ed Hernandez Saturday night, as we watched Alvarez make his ring walk and ring entrance, that we  were looking at a very special fighter, someone poised for greatness. His fight with Carlos Baldomir seemed to put a stamp on it. Alvarez is a well trained fighter and shows skills far beyond his twenty years. There is an old school aura that seems to permeate the air around him.

Former fighter and current boxing historian and writer, Rick Farris,  had this to say about Alvarez: “I know this kid is getting a lot of publicity and I think it's a good thing. I've only seen him in his match with Cotto's brother but I was impressed. The great thing about Alvarez is that he is not a product of amateur boxing. There was a time when the amateurs was a great start to a pro career. As they tried to make amateur boxing "safe", they came up with rules that has taken the fight out of boxing. Basically, today's amateur boxing is ruining the sport. I can understand why the younger generation is gravitating to MMA. People want to see something that suggests a fight, not a game of tag. Alvarez is a solid body puncher, and can come back after being rocked to KO his opponent. He comes to fight. ‘ I couldn’t agree more.


Baldomir seemed angry as he entered the ring, scowling and pushing aside one of his handlers arm. He should have saved some of that anger for Alvarez. Baldomir seemed to break down round by round and had no real answers for Alvarez, who was consistently landing right hands against Baldomir.  It was a right hand by Alvarez and a quickly followed up left hook that finished Baldomir in the sixth round. Saul Alvarez was the main event of the evening. 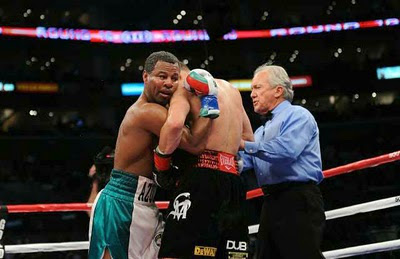 There were rumors of a fight between Mosley and Mora Saturday night. We were mislead. Instead of a fight we got an early audition for “Dancing with the Stars”.  I don’t know how else to put it.

Mosley, once an elite, top of the game fighter, is aging quickly now but even with that I thought he beat Mora, in what has to be 2010’s Snoozefest” of the year. Mora is lucky he was facing an aging warrior in Mosley. Mora never has been, and absolutely never will be, in Mosley’s league, not even the same ballpark. I couldn't help but yell for Mosley to knockout Mora and end the fight. It's hard not to root for a guy like Sugar Shane.

To his credit, Mosley at least tried to make a fight of it but his punches no longer have the sting they used to and the hands no longer have that quick fluid motion that scored so many victories. The legs are gone too. Still, he was more than enough for Mora, who did nothing to deserve a gifted draw.

By the way, did anyone else notice the head clash between Bernard Hopkins ans Sugar Shane Mosley just before the introductions? Wouldn't have been something? The fight stopped on cuts caused by an accidental head butt before the fight even started!
By Randy De La O at September 19, 2010