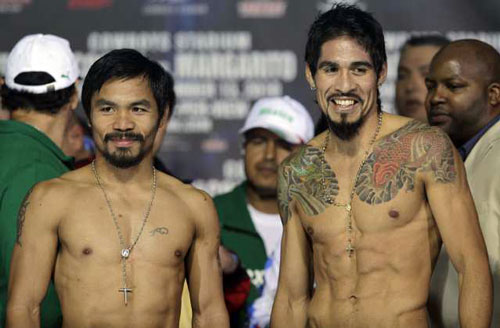 Manny Pacquiao weighed in at a surprisingly low 144.6 pounds Friday, making it possible he could weigh 15 pounds less than Antonio Margarito by Saturday night's fight.
"I'm not worried," Pacquiao said, walking off the stage at Cowboys Stadium. "That's what we did for training, train hard. My weight came down from what it was to make me faster.
"For the last week and a half, [trainer] Freddie Roach let me do what I wanted to do, get to where I'm as fast as I can be."
Roach, standing behind Pacquiao, nodded, and said that was "100%" accurate.
Margarito, poised to make his return to fighting in the U.S. after a nearly two-year-long banishment, weighed in at the junior-middleweight catch-weight limit of 150.
He scoffed at suggestions by Pacquiao's conditioning coach and manager that he looked "dehydrated" and "shot."
"It's very good, I'm very strong," he said. "They can say what they want. I feel very strong."
There'll be more news to come from today's weigh-in at latimes.com/sports, and Twitter.com/latimespugmire.
--Lance Pugmire