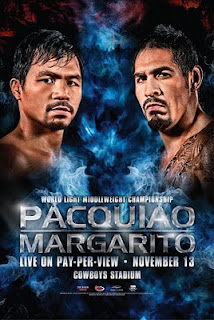 Looking to the positive, I expect these two to match up better than Pac & Floyd.

Regardless of who Floyd Jr. fights, he's going to make it a boring match.

Margarito comes to fight. So does Pac. To me that's the recipe for a good match, regardless of outcome.

Regardless of who wins Saturday, I wouldn't be unhappy to see Margarito receive a career ending injury.

This is one thing that seems overlooked by most when it comes to what a boxer must have to achieve greatness.

Since Muhammad Ali was never known as a big KO puncher, everybody points to his hand speed, strong chin and skill, as what made him great.

What made Ali great was his charactor. Lack of charactor is what seperated Mike Tyson from true greatness.
It was charactor that kept Ali fighting when he was hurt, not his strong chin.

It takes character to truly overcome great odds to succeed.

Antonio Margarito has proven that he has no character, and certainly no class.

Margarito can whip a lot of welters, but has no chance with a great boxer with character, regardless of size advantage, or distractions, etc.

I resigned from my position as head of the selection commitee for the WBHOF. That's good for guys like Margarito.

There are boxers who have been inducted into the WBHOF who aren't as good as Margarito, but I assure you that Margarito's name would never be found on a WBHOF ballot had I remained in charge.

It's not about cheating. I've cheated on things, and I might do it again. However, my definition of cheating relates to saving a few bucks on taxs when I know I can, not putting another man's health & welfare in jeopardy, a man who's chances of winning were only considered one-in-five.

I don't think Margarito should be boiled in oil. I just want him out of boxing.

Margarito making fun of Freddie Roach's Parkinson's Disease? As I mentioned before, I hope this guy suffers a career ending injury.
By Randy De La O at November 12, 2010