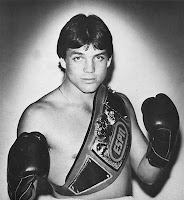 Back in the day when Louie Burke of Las Cruces, New Mexico, was winding down his career, after fighting the likes of Charlie “White Lightning” Brown, Freddie Roach and Hector “Macho” Camacho, he could not have anticipated that the best was yet to come. How could he know that 2011 would be his year.

On February 5th of this year, trainer Louie Burke guided super welterweight Austin “No Doubt” Trout to victory over tough Rigoberto Alvarez of Mexico, to win the WBA World Super Welterweight Championship. And on Saturday, June 25, of this year, Louie will be inducted into the California Boxing Hall of Fame. A deserved honor.

His first trainer was his father Sam Burke, a former amateur boxer, a Marine and Korean War veteran that was wounded in action during the war. After returning from the war Sam became a trainer and was eventually a boxing coach for the U.S. Boxing team. Louie had a good man in his corner. After his father’s death in 1984 Louie was trained at different times by both Jesse Reid and Angelo Dundee.. 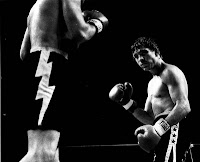 After an amateur career that saw Louie winning the Silver Gloves State Championship, several Golden Gloves and AAU Championships and at one time being ranked as high as number three in the country, Louie turned to professional boxing. Louie had his first fight on May 29, 1981, knocking out Gilbert Garza in the 3rd round at the HemisFaie Arena in San Antonio, Texas. His last fight, on May 5, 1995 was against Rosendo Alonso at the Pan American Center in Las Cruces, New Mexico, suffering a 5th round TKO. In between those two fights Louie never gave anything less than 100% of himself in every fight. In 1984 Louie fought a highly controversial fight with Charlie “White Lightning” Brown, a fight in which many fans still believe belonged to Louie. In 1983 Louie beat Freddie Roach in a 12 rounder, at the Showboat Casino in Las Vegas, Nevada to win the ESPN Lightweight Championship. They fought a rematch later on in the year, this time at Caesars Palace and again Louie got the nod in a 10 round decision win.

Louie, a father of two; a daughter and a son, and along with his brother, referee Rocky Burke, continue to give back to the community and the sport of boxing and they continue that journey that began years ago with their father, Sam Burke Sr.

Congratulations to my cousin Louie Burke and the Burke Family on his induction to the California Boxing Hall of Fame.

Congratuletions to Louie Burke on
being inducted into the California Boxing Hall of Fame-and for the big win with Austin Trout.