What If: Rocky Graziano vs Jake "The Raging Bull" LaMotta 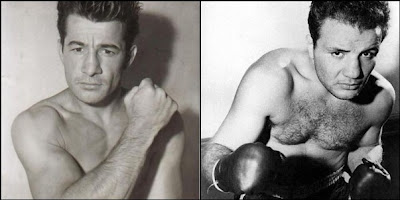 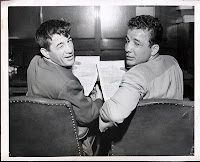 It might have been a great fight but it never happened. Graziano and LaMotta were scheduled to fight on June 14, 1950 but for one reason or another, the fight never came off. You can't help but wonder.

Between Jake La Motta and Rocky Graziano, LaMotta is generally considered the better of the two and I tend to agree with that assessment. Sometimes on the surface it might mean something or as we see every so often, it can mean absolutely nothing.

Both men were hardened veteran's of ring wars, Both were middleweight champions during their careers. Graziano known for his trilogy with "The Man of Steel" Tony Zale in which he won and lost his title, LaMotta for his six fights with the lengendary Sugar Ray Robinson. LaMotta won one fight and ultimately lost his title to Robinson. Both fought their fair share of "tomato cans" (bums). Both came from a "Dead End Kids" envioroment, LaMotta from the Bronx, hence the nickname "The Bronx Bull", and Rocky from the Lower East Side of Manhatton, New York. Both were Italian Americans. Rocky was sort of a lovable hood and immensely popular. LaMotta, not quite so lovable and not so popular. LaMotta had a total of 106 fights, he won 83 of them with 30 KO's, he lost 19 and got stopped in four of his losses and had 4 draws. Graziano fought for a total of 83 fights, winning 67 of his fights, 52 by knockout, he lost 10 fights, getting KO'ed in three of his losses, and had 6 draws. It's interesting to note that while LaMotta had more fights, Graziano had a better knockout ratio.

Graziano was an exciting, reckless fighter without much defense, he had a better than average punch and a huge heart. LaMotta was a much tighter package. While not exactly a techician, he did posses better defensive skills than Rocky, as well as better jab. His bggist asset was his chin and endurance. As for punching power, he was much more of a "Grinder" that would eventually wear down an opponent.

I don't see Rocky winning this fight. I see LaMotta's chin offsetting Rocky's punch. His better skills would allow LaMotta to get inside of Graziano and take advantage of his lack of a good defense. I see it as a great, crowd pleasing fight that would more than likely end by a late round stoppage of Rocky Graziano. The fans would definitely get their monies worth.

To my late,great uncle-LaMotta was the man;I think he fought in Detroit more than any city other than New York-he won the title in Detroit..to my uncle,Graziano had
zero chance-and "claimed" he'd hurt..or broken his hand in training-a claim my uncle claimed was more ridiculous than any possibility Graziano had of winning.

I'll take your uncle's word for it. He knew boxing.

hey randy! hows it going? its been a long time! ive been following this blog for quite some time. i just havent been around. i noticed that the site has changed its look but its still the best boxing blog around. i hope you still remember me...


every so often i call the champ to see how he's doing. i back up brian's story 100%...jake told me the same thing cause i asked him about it

Mike, of course I remember you. Good to hear from you. I thought something might have happened to you. Glad you're okay.

I know Jake is your man. One tough hombre.

What's new with you? Are you still training?

hey randy! thats awesome that you still remember that the bronx bull is my man...good stuff! alot has happened since the last time we chatted...to make the long story short, im not in california...im in florida for the time being...ill email you the details.


i wanted to share something that ive written a while back with you and your readers since its valentines day. enjoy!
http://www.broowaha.com/articles/3107/february-14-1951

i have other boxin' stories there too. feel free to browse through...

There weren't too many tougher than Jake LaMotta. Good article Mike!

I was messing around on google and found this article.

My name is Aaron Graziano.
Rocky was my grandfather.

He would of knocked Jake right on his ass.

Jake LaMotta was not at his best in 1950. Rocky Graziano would have scored a TKO around round 6.

Graziano was too wilid and beat alot of welterweights coming up LaMotta could not even find middleweights to fight he freakin stopped Bob Satterfield one of the hardest hitting Heavyweights in history a man that stopped Cleveland Williams and was in a different league talent wise no conrest and Graziano pulled out the fight with a chronic injury.

I must put my 2 cents in here...If lamotta and graziano had

the kind training in todays world and the supplements out there,they would have kicked ass and taken names...

I believe that Graziano's superior punching power would have damaged LaMotta's face and eyes to the point that Rocky would have won by a TKO in the later rounds.

Graziano hit much harder than LaMotta. Some of his blows would connect and disrupt LaMotta's game plan. I envision Graziano winning by TKO in the later rounds. Val

Very amazing and informative article i like the way writer wrote this article it helped me a lot in research of Greatest Boxers of All Time if you want to know more info about Boxing, please click here on www.tributeboxing.com.au.