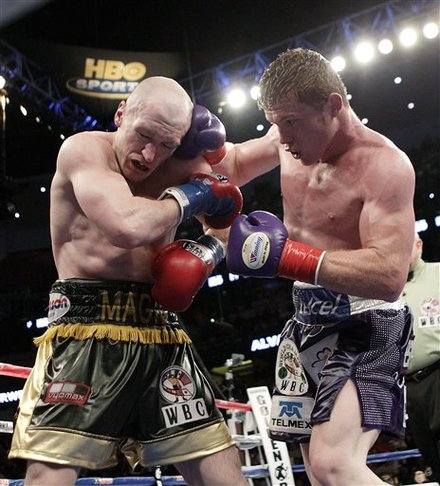 Saturday’s fight, at the Honda Center in Anaheim, between Saul “Canelo” Alvarez and Matthew “Magic” Hatton, for the WBC Junior Middleweight title was not a great fight, it was however, a great showcase for Canelo’s talent. Canelo pitched a near perfect shutout over Hatton. I say near perfect because a point was taken away from Canelo in the 7th round for hitting after the break.

It was obvious from the start that Hatton was in over his head. He had neither the fire power nor the skill level to seriously challenge or hurt Alvarez. What he did have was grit and plenty of it. Each round was almost a carbon copy of the one that preceded it, with Canelo having his way, and with Hatton looking like he was ready to cave in and then coming back again and again with punches of his own, absolutely refusing to lay down. Still, the gutsy Brit took a lot of punishment.

Matthew Hatton was looking to step out of the shadows of his older brother, former champ Ricky Hatton, and I think to some degree he succeeded. Hatton’s style can be somewhat ugly, with all the holding, hitting behind the head, hitting after the break and hamming it up on the floor on two occasions. However, he is a survivor and he does possess a fighter‘s heart. Despite what even he must have sensed during the fight he never stopped trying to win. . Can’t fault a man for that type of thinking.

I don’t want to rain on anyone’s parade and I do agree with Max Kellerman, Bob Papa and Roy Jones Jr, that Alvarez is something special, but I do disagree that he is the complete package. Someday maybe but just not yet. That’s no knock on Alvarez either, he is after all only 20 years of age. He may one day be an all time great but at this point the kid still has a few things to learn.

In the later rounds, he became frustrated by his inability to put Hatton away and it showed. Another fighter, a better one than Hatton, might have capitalized on it. It’s one thing to take a good punch but it’s another thing altogether to take a punch foolishly. Without any defense Alvarez will never be a “Complete Package”. The history of boxing is replete with fighters with big punches, no defense and short careers. The really great fighters, the ones that hang around a while, regardless of style or punching power know enough to move their head just a little.

Canelo strikes me as a smart kid and I think he’s the type of guy that will learn from his mistakes. There was nothing I saw that couldn’t be tweaked and adjusted. Maybe I’m just nitpicking, I don’t know. Still, I know what I saw. In the post fight interview I thought both men handled themselves with grace and dignity. In Hatton’s case he was an extremely good sport about losing and made no excuses. That’s the way it should be.

Alvarez won the fight via a unanimous decision. All three judges had it 119-108 for Alvarez.

One final note. I thought Lou Moret, normally a fine referee, was asleep at the wheel during the entire fight. He seemed lost and a step or two behind the action and he almost gave the impression of not wanting to get too involved. In the long run it really doesn’t matter because the fight was so one sided. I thought Hatton got away with too much holding and hitting behind the head, and I thought the wrong guy got the point taken away form him in the 7th.

Missed it...But from what I've seen,Canelo appears to be a major talent-36-0-1;at 20,with his first pro fight at 15-that's a helluva lot.Hopefully,he/"they" don't burn him out.