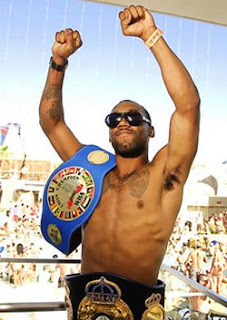 Since defeating Rigoberto Alvarez for the WBA World Light Middleweight Championship Title in February 2011, Austin ‘No Doubt’ Trout has been busy. Austin is busy establishing himself as a force to be reckoned with in the Boxing Ring. He defended his World Championship Title against David the ‘Destroyer’ Lopez on June 2011 in a unanimous decision. Austin 'No Doubt' Trout is also busy living up to the responsibilities that a World Champion has to his community.

In March, shortly after winning the World Championship, Austin Trout shaved his head bald to raise money to KO childhood cancer. This “St. Baldrick’s” fundraiser helps support research for finding cures for childhood cancers. Austin was honored to share the stage with courageous youngsters who were fighting for their lives against cancer.

Shortly after “St. Baldrick’s“, Austin ‘No Doubt’ Trout donned a pair of running shoes, not for roadwork, but to participate in the March of Dimes Walk-a-Thon, raising money for worldwide programs to help prevent birth defects.

A couple of weeks later, he slipped on a pair of shorts, not boxing shorts, but swimming shorts, to be the prize going into a Dunking Booth, for the “One Small Voice” organization, which raises money to educate and find a cure for diseases that cause blindness in children. The Champ got soakin’ wet for a great cause! In August, the Champ’s fancy footwork was tested in a ‘Zumba-thon’ for this great organization.

After that, Mr. ‘No Doubt’ Trout put on the charm to meet and greet all the nice people that came to the “Habitat for Humanity” celebration. Habitat for Humanity is an organization that combats poverty by building eco-friendly homes for low-income families and victims of natural disasters.

Beginning September 2011, Austin Trout is serving on the Board of Directors for the Police Athletic League. This is an organization that is part of Austin’s roots in boxing. It was in the PAL Boxing Gym that Austin developed from a scrawny kid into a World Champion Boxer. His participation on the Board of Directors will ensure that other young kids have the same opportunities that he had.

Then in November, he’ll be working on his fancy footwork, not in the ring, but on the dance floor, in Las Cruces’ version of dancing with the stars, “ Look Who’s Dancing!” mamboing and cha-cha-ing to raise money for New Mexico State University’s dance company.

In December Austin Trout will play Santa Claus, giving brand new bikes away to the kids, whose families cannot afford to buy one. In the last 3 years Austin has participated in the “Jim Franklin Bike Give-Away,” already having given hundreds of bikes to underprivileged youth in the Las Cruces area.

A full plate to say the least! When asked if the charities Austin’s involved in distract him from his grueling training regiment, he simply answers, “God gave me the opportunity to fight for, and win the World Championship! I feel God gave me that opportunity so I can help other people that are less fortunate than me or that might need a shoulder to lean on. I’m just a “Soldier of God”!
By Randy De La O at August 31, 2011

The kind of champion who brings credit to the sport! I hope this guys holds the title for a long time. Boxing needs more guys like this!

This is nice post. i enjoyed to read it. Thanks for sharing with us... Good job! Keep posting...

Hi Very Nice Blog. I Have Read Your Post. It Is Very Informative And Useful Thanks For Posting And Sharing With Us And Your Writing Style Is Very Nice.
kids boxing shorts