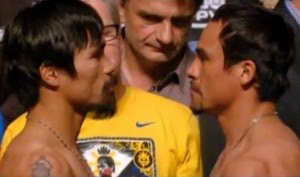 Jeri and I were at the hospital earlier visiting our granddaughter Maddie (she was doing good), we walked over to the cafeteria for some coffee. While we were sitting down talking she asked me, “So who do you think is going to win the fight tonight?” Referring to the Pacquiao vs Marquez fight tonight. She already knows, so it was really just a rhetorical question. Still, I wanted to answer it honestly. “Well, you really have to go with Pacquiao, he's been a great fighter”. “They fought before, right?” she asked. “Yes, and they were very close.” “Was Marquez robbed? She asked me. “No, there was no robbery, some just feel that the decision could have just as easily gone to Marquez but there was no robbery.”

That's pretty much how I honestly feel. There was no robbery involved, no one stole the victory from Marquez. Both fights were very close. They were close enough and exciting enough to warrant a third fight. But at 38, Marquez chances are much slimmer now than, say, three years ago. Still, Marquez has always been the type of fighter that I admire; a tremendous heart, great boxing and counter punching ability, a willingness to mix it up, and a refusal to quit.

His quiet demeanor has sometimes worked against him. In some ways he reminds me of the great Alexis Arguello, not so much that both were great counter punchers, but in the way that both approached their sport. Arguello was, and Marquez is, the type of fighter that comes to work, clocks in, does his job to the utmost of his ability, then clocks out and goes home. No bull shit about either fighter. Perhaps too, like Arguello, Marquez will never beat his greatest rival but it won't be because he didn't try.

There is a type of fighter that really gets to me. The late Joe Frazier, of course, was the epitome of that type. I'm talking beyond style. I've mentioned before that heart is the quality that I admire more than any other in a fighter. Sometimes it will take a fighter to hell and back, sometimes to victory and sometimes to defeat. So what it comes down to, to me, is not always so much how a fighter wins but also in the way he loses. Even in defeat some men are magnificent.

I was trying to explain to Jeri too, on what makes a champion. There have been so many great champions over the years (not so much lately) but what sometimes defines a great champ is not so much that he was better than everyone but that when facing a bigger, stronger, better fighter, he still finds a way too win. That's what true champions do.

So, that's Juan Manuel Marquez' task tonight. To find some kind of way to beat a younger, faster, better fighter, with an equally big heart and with a mission that will rival his own, These are the fights that become legend.
By Randy De La O at November 12, 2011

Shakespeare: "Let's kill all the boxing judges (and lawyers)..

Shakespeare had it right and while we're at it, Lampley and Kellerman too!