From my friend Ray Maynez 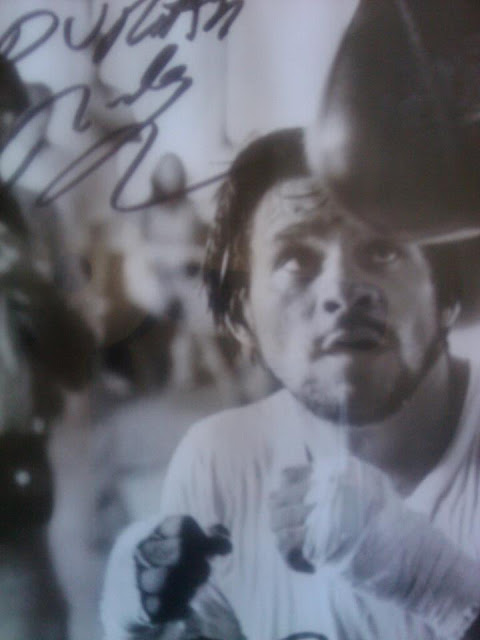 
"I beat the great Roberto Duran"

Shortly after the Famous "No Mas" fight between Roberto Duran, & "Sugar" Ray Leonard, I was watching television late at night when the sportscaster came on. After giving all the scores of the various sports of that day. He mentioned that Roberto Duran, was in town, and that he would be working out at the Broadway Gym, in L.A. the next day at 1:00 pm.

I had a 8X10 glossy picture of Duran, that I had for quite some time. I called up my friend Eddie B. I asked him if he wanted to go with me to see Roberto Duran, workout? Maybe I could get him to sign my picture. He said sure. The next day I showed up at the gym. There seemed to be only a few people there. One person I recognized was Richard Steele, the referee. I walk over to a gentleman I recognized as being in Duran's corner occasionally. I asked him "is Roberto Duran, supposed to be here today? because I have this picture I would like to have him sign for me. He stated "Yes" but he's in a very bad mood! so you better ask him before he gets into the ring. Just as he said that Duran, walks right behind him and jumped into the ring, and proceeded to shadow box. I said to my friend 'Shit".LOL.

As he worked out I stood right up to the ring, holding the picture, so he could plainly see what i wanted. After shadow boxing for about 20, minutes, he asked his trainer for a towel. He looked at me and gestured to me to come over. I handed him the picture, and told him my name was Ray! He smiled. I wonder why. "Ray??. After about 5 minutes he hands it back to me. I thought "Wow" he must of wrote something long. It said Roberto Duran. I thanked him. Then he walked over to a table that had a checkers board game on it. Again he motioned to me to sit down. At this point everyone in the gym came over to watch us play checkers. I was so much in awe! I really couldn't concentrate. He won a few games, & I won a few games. I will never forget the day I beat the great Roberto Duran at Checkers. The Picture, here on this post is the one he signed.