Rick Farris on Sparring With a Legend


Roberto Duran and the Horseshoe 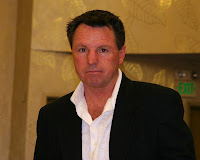 In March of 1973, Roberto Duran, Lightweight Champion of the World, came to Los Angeles to fight Mexican champ Javiar Ayala in a ten round non-title fight. The match was on the same card with the WBC Lightweight Championship bout between title holder Rudolfo Gonzales and challenger Ruben Navarro.

Navarro and I were stablemates and would often spar together. However, for this match Ruben had a group of sparring partners whose styles were more like Gonzales than mine. Two years previous, Ruben came close to upsetting then lightweight champ Ken Buchanan but lost a close decision. This would be another opportunity to win a version of the world title and he was taking no chances.

One day I arrived at the Main Street Gym shortly after Duran and Navarro had completed their workouts. I talked to Ruben in the dressing room as I laced up my boxing shoes. That day, Navarro had sparred with Duran and he seemed a little different than usual.

"This guy hits harder than anybody", Navarro said. "He hit me high on the forehead with a spent jab and it shook me all the way down my back to my toes". I had known Ruben for quite a few years and never heard him express respect for another fighter as he was Duran. It was almost as if he was intimidated, not in a cowardly sense, but in a way that caught me off guard. Navarro had fought and beaten some of the best lightweights and Jr. lightweights in the world during his career, so I had to believe what he was saying.

A few days later, I was in the gym at the same time as Duran and it was fascinating watching him train. He skipped rope like nobody I'd ever seen, including the great Sugar Ray Robinson. Duran could do things with a jump rope that made for quite a show. However, the most entertaining of all (aside from his sparring) was watching Roberto hit the speed bag with his head. I don't mean just banging it back and forth, Duran could make the bag dance with his head as well as most boxers do with their hands.

However, watching Duran spar was the real show. In fact, Duran didn't just spar, he fought all out regardless of who he was in the ring with and it was common for a sparring partner to hit the canvas and be out cold. When
Roberto would launch a body attack he'd fire vicious shots that would land with a thud. He'd let out a "yelp" as the punch was delivered. The high pitched noise coming from Duran's mouth would punctuate each blow and had an eerie effect. I was impressed, to say the least, and privately thought to myself, "Glad I'm a featherweight and won't have to fight this guy".

Little did I know that my manager had been talking with Duran's trainer, Freddie Brown, and had agreed to let me spar with Duran. It wasn't something I had a great desire to do, but a fighter doesn't show his feelings so when I got the news I just acted like it was no big deal. I was told that the only reason I'd be working with the larger Duran was for speed. I had fast hands and would provide quickness for Duran. Brown had assured my manager, Johnny Flores, that Duran would work lightly and not cut down on me.

Somebody must have forgot to tell Roberto the plan and about midway thru the opening round I found myself sitting on the canvas. I got up quickly and was OK but it occurred to me that I might be fighting for life. When the sparring resumed I understood what Navarro had meant when describing Duran's power. It was awesome, and even punches that most would consider average shots had something I'd never felt before. It was like being hit with baseball bat. Duran had 16 ounce training gloves on that looked to be padded, but it didn't feel like they were. This was before Roberto had been tagged "Manos de Piedra" or "Hands of Stone" in English. I can personally verify that this is more than just a nick name, it's a fact!

Duran is a guy who considers the ring his personal domain and anybody who stepped in with him was treated as if they were caught breaking into his home. The ring was Duran's office and he'd establish this immediately with anybody who entered, including me.

After the three rounds of torture with Duran, I punched the heavy bag. The champ finished sparring with two other boxers, a lightweight and a welterweight who was beaten so badly he left the ring trembling. After Duran stepped out of the ring Freddie Brown untied the champs gloves and pulled them off. I was resting between rounds on the heavy bag and moved closer to Duran to get a look at his hands. There had to be something harder than a fist inside the gloves and I wanted to see what it was.

Brown glanced over at me and said something to Duran in Spanish and the two began to laugh. I asked Brown "What did you say to him"? Brown just looked at me with a smile and answered, "I told him you were looking for the horseshoe".

I had to laugh, but honestly, that's exactly what I was doing. However, The only thing I found in Duran's gloves were his fists. Or as they would later be known, "Hands of Stone".

About a week later, at the Los Angeles Sports Arena, my friend and stablemate Ruben Navarro was stopped by Rudolfo Gonzalez in his last attempt to win a world title. In the fight before the title match, the real lightweight king Roberto Duran battered Javiar Ayala savagely and won a unanimous ten round decision.

With the feel of those rock hard fists still fresh in my mind, I knew that Javiar Ayala discovered the same thing that Navarro and I had just days before. The horseshoe had nothing on "Hands of Stone"

Rick, I'm sure you held your own against Duran, you always had a fighting heart.