The original, and one and only true Jack Dempsey's Broadway Bar and Restaurant, in New York.. 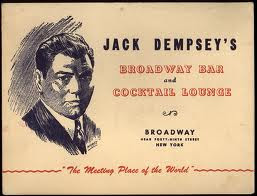 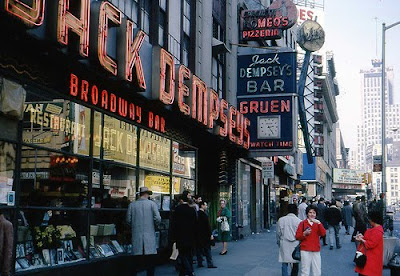 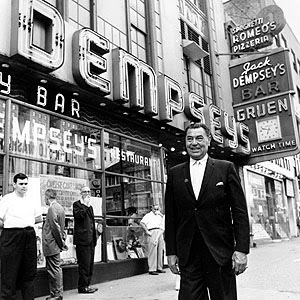 Jack Dempsey's Broadway Restaurant, known popularly as Jack Dempsey's, was a restaurant located on Broadway between 49th and 50th streets in Manhattan, New York. Owned by world Heavyweight boxing champion, Jack Dempsey, it was considered by many as an American institution. The restaurant originally opened for business as Jack Dempsey's Restaurant on Eighth Avenue and 50th Street, directly across from the third Madison Square Garden, in 1935. Most nights would find Dempsey's famous proprietor on hand to greet guests, sign autographs, pose for pictures, and hold court with people from all walks of life.

Located next door to Jack Amiel's "Turf Restaurant" on Times Square, Amiel became famous as the owner of the "underdog" horse Count Turf who won the 1951 Kentucky Derby. A few years after his Derby win, Jack Amiel became a co-owner of Jack Dempsey's Restaurant, which closed in 1974.

Jack Dempsey's Broadway Restaurant appears in the movie The Godfather (1972). Michael Corleone stands in front of Jack Dempsey's while waiting to be picked up by Virgil Sollozzo and Capt. McCluskey for their infamous dinner meeting.
[edit]