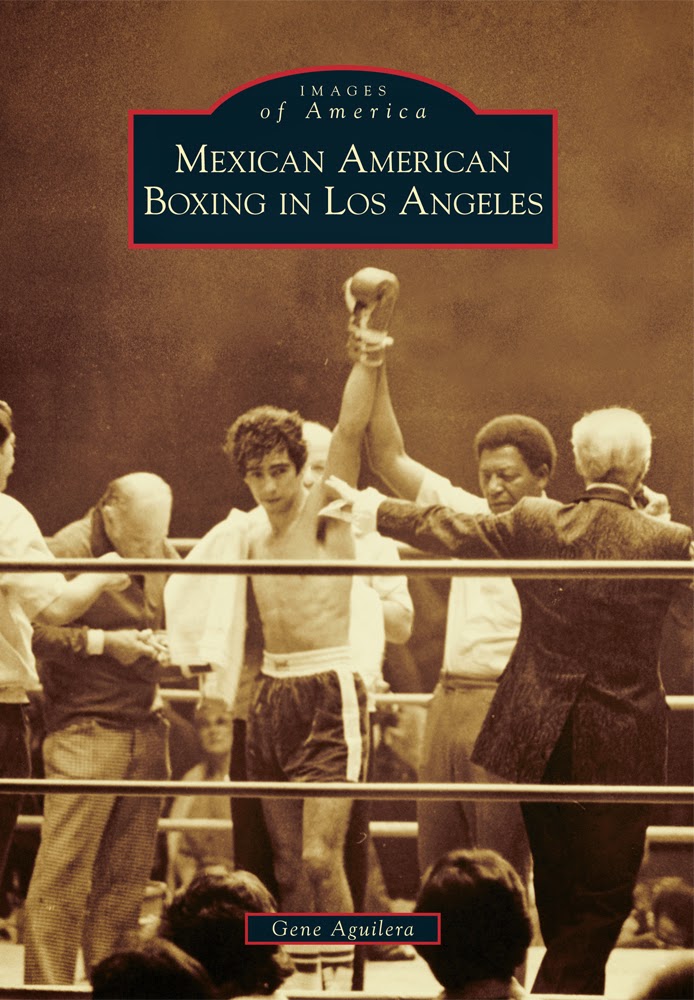 “To a boxing fan, it is the greatest sport in the world. A boxer is an isolated gladiator in the ring, no teammates to help out, only your opponent stands in front of you. Promoter George Parnassus said “In boxing it is one man by himself, against one man, all alone. That is what it comes down to, does it not, to know which man is the best?” An understated irony is that one minute you are at war and the next minute you are hugging like best of friends, like turning off a light switch” - Gene Aguilera


Mexican American Boxing in Los Angeles by Gene Aguilara is a like a walk down memory lane for me  and it is long overdue. Los Angeles fighters, and West Coast fighters in general have become synonymous with courage and  heart. The rich history of boxing in Los Angeles is on par with any city in America. Gene Aguilera brings that history to the forefront for boxing fans.

Aguilera's book is a pictorial history of Mexican Americans boxers in Los Angeles but it is much more than than that; with stories, bios and notations with every photo, he covers the gamut of boxing in L.A., from the early 1900 to the present day, from Aurelio Herrera, Mexican Joe Rivers and Whittier's own, Bert Colima to mid century fighters like; Manuel Ortiz, Enrique Bolanos and Art Aragon, and beyond. It stands as a definitive reference book.

I suppose, like most fight fans, I look at the era that I grew up with as the most meaningful and personal and that would be from the 1960's and up. All the familiar names are there; Mando Ramos, Rodolfo “El Gato” Gonzalez, Bobby Chacon, Danny “Little Red” Lopez, Herman Montes (Herman is on the cover of the book), John Montes, Frankie Baltazar Jr. and Tony Baltazar. Some were champs, some were contenders but they all fought their hearts out for their fans. The great fight venues are also covered in this book; The Forum, The Hollywood Legion Stadium, the Olympic Auditorium and more. The author gives us an up close and personal view of the fight town that is Los Angeles.

I enjoyed this book and I understand the author's passion. I recommend Mexican American Boxing in Los Angeles to any and all boxing aficionados,. You do not have to be Mexican American to enjoy this book. Do yourself a favor and get a copy.

Boxing is an amazing sport that not only teaches you to fight, but teaches you to work hard, and gets you in shape. It's a hard sport, but it's worth the pain and hard work. I'm grateful we have things like this that help people have better lives.

Boxing took me and my brother from the street's living under a broken home,mom and dad being divorced. my dad took us to a boxing gym were we loved it so much. involved in winning boxing tournaments traveling to other state's fighting in National tournament's .we both eventually boxed pro. Becoming ranked fighter's we were able to travel to other countries and through out the United State's .the sport of boxing was good to us my dad John Montes trainer,my brother Johnny " Wito " Montes and myself Herman "Kid"Montes .If I could do it over again, I would in a minute. because it was the greatest high a human being could ever have being in great condition ....