Former Boxer Holly Holm Knocks Out Ronda Rousey in the 2nd Round! 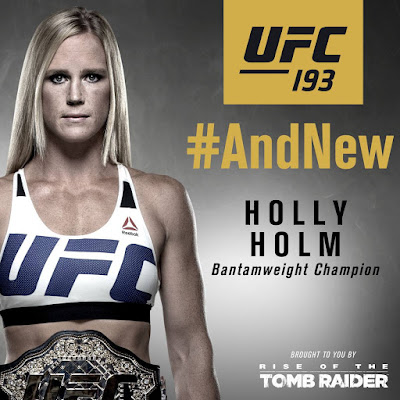 You know boxing is my sport and I don't usually comment on UFC/MMA fights (or is MMA/UFC?) but I'm making an exception on this fight and the reason should be obvious.

Before I say anything else I do want to give Ronda Rousey credit for her part in last night's fight between her and Holly Holm. She was outclassed and outfought the entire fight but to her credit she showed a big heart. She never stopped looking for an answer to Holly's fighting style. There just weren't any answers to be found.

From this moment on, this is where Ronda Rousey will finally meet her real self. How she handles the loss, and it was a big one, will determine if she can regain her former position as the top women's fighter of the world. This is where she really finds out what she is made of. I wish her luck.

From the get go Rousey had no clue on how to fight a southpaw. Holly figured that out immediately and landed the left hand whenever she chose and she did it without much resistance. Her corner had no clue either.

Rousey was facing a former undefeated boxing champion and a great one at that. Holm trained every day not only to dish it out but to take it as well. There is a big difference in learning "Striking Techniques" and being a true honest to goodness boxer. The difference in the boxing ability between the two was apparent from the start of the fight.

Holly also dispelled the notion that once a boxer is on the ground the fight is all but over. A fighter is a fighter and will try to find way to win in any situation. Rousey had Holm in her grip at least twice during the fight and on the floor once and could not keep her there. She did not lose because she chose to stand and face Holm. She did not lose because she lacked a real game plan. She lost because in Holly Holm she was facing a more determined, better skilled fighter. That is the long and short of it.

Somewhere in the first round you could see in Rousey's expression that she knew the gig was up. She looked demoralized but to her credit, she showed the heart of a fighter and gave it her best shot. What more can we ask of any fighter, regardless of their discipline?

To be fair, this fight should not be construed as a litmus test, as proof that a boxer will win every time out against a mixed martial arts fighter. The next fight between any boxer and MMA fighter could turn out differently. It will depend on the fighters themselves.But I will say this, the notion that MMA wins every time out has turned out to be just another myth. Plus they need better "Striking Technique".

To fight like a girl has a whole new meaning!