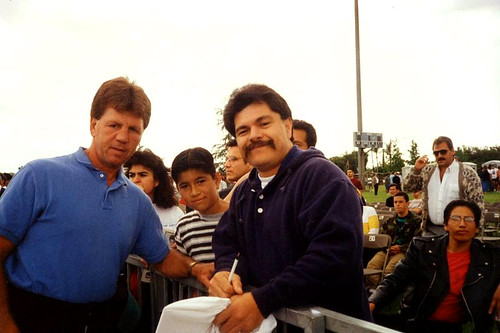 Earlier this year I won 2nd place with this short story on a private boxing forum on Facebook.. The rule was it had to be a true boxing related story. Since the forum is private I won't mention the name without their permission. I enjoyed remembering and writing about it.

I first saw Mike Quarry in 1967, at the Olympic Auditorium. I was there with my father to see Mando Ramos fight. We sat ringside, a couple of rows back. A family started crowding the row in front of us. They took up several seats in the row. A teenage boy a few years older than me walked up, looked around and we caught eyes for a second. He smiled and sat down. “That's Mike Quarry” my father said.

I was at the Main Street Gym in Los Angeles , in mid 1976. talking with my trainer, Mel Epstein, getting ready to skip rope. I looked up as the doorway to the gym opened. It was Mike Quarry. He was impeccably dressed in a blue three piece suit. He had a smile on his face and carried himself with an aura of confidence that told you he was a professional.

“You're sparring with Quarry”, Mel said, “He needs to work with someone smaller and fast. You okay with that?” A short while later I was ready to go. “Don't get nervous just because it's Quarry” and don't slug with him, you're just sparring”. “I'm not nervous Mel.”

There was probably a 25 or 30 pound difference between us. I was a welterweight, Mike a light heavyweight. Still, I did what I could. I was looking for that friendly smile but it wasn't there. It was a hard workout but I just kept moving forward and managed to land a few punches of my own.

Later, with a smile back on his face Mike walked up to me and said “Tomorrow?” “Sure. I'll be here!

The next day was more of the same. This time a friend came to watch. Mike was tough to spar with. I'm not complaining, it's just an observation. He was a professional. His job is to get in the best possible shape. I understood this. Boxing is a tough business. You're either up to the task or your not.

After sparring, Mike was back to his friendly self, smiles and all. They were sincere smiles too. That is a lesson I learned from Mike. Outside the ring; friendly, get along with people but inside the ring, in the gym or in the arena, take care of business.

On the way home that day my friend said to me. “Quarry kicked your ass but you never backed up, I'll give you that!” “Yeah, well......”

I went back for another day of sparring. Mike began to have fun with me – fun for him, not for me – he started throwing some hard shots,and showboating. He dropped his hands and did the Ali shuffle. I'm not going to lie. I was tired of feeling like a punching bag. When his hands dropped to the side and his feet began to shuffle I was a little irritated. When he thrust his chin toward me and chuckled I let go of a right hand. It landed flush. It caught Mike off guard and sent him to the ropes. He came back and jokingly wobbled but I knew, at the very least, I got his attention. It took me three days to land that punch.

Drying off in the locker room Mike said, “Randy, you gave me a harder workout than most of the light heavyweights that I spar with. I mean it, thanks!” Outside the ring it was hard not to like Mike.

Later that year we would meet again. This time at the Aladdin Hotel and Casino in Las Vegas. It was October 30, 1976. Mike was fighting Tom Bethea that night. I was on the undercard .

Mel and I arrived the day before the fight. Mike was a popular fighter but in terms of big money fights and fan base, he was no Muhammad Ali or Roberto Duran but the fight was to be shown live on the Wide World of Sports, so there was a sense of excitement. Mel took me around to meet everyone. That's when I met Joey Giambra, Ken Norton, and Eddie Futch. Giambra was the referee for my fight that night. Norton was the announcer.

We saw Mike at the Blackjack table, and spoke with him a while. He was feeling good. He was his normal self, smiling and friendly.

The next morning we got up and went to the weigh-in. Mike and Tom Bethea were there. This was in the days when the weigh-in was the day of the fight.

It would be eighteen years, 1993, before I would see Mike again. It was a benefit, in Azusa, California, for a local fighter, Johnny Chavez, from the La Puente area, who lost his eyesight after a fight. I was there with my son Andrew. There were some good fighters there that day, Frankie Baltazar Jr, Danny “Little Red” Lopez, Alberto Davila, Ruben Castillo, Ray Mancini and Mike Quarry.

I spoke with Mike for quite a while. I introduced my son Andrew to Mike and they shook hands. You could see Mike was damaged but he was in good spirits. That smile was still there. That made me smile. Mike was there with a friend whose name I can no longer recall. He took a photo of Mike, with my son and I, and mailed it to me some time later. That was the last time I saw Mike Quarry. 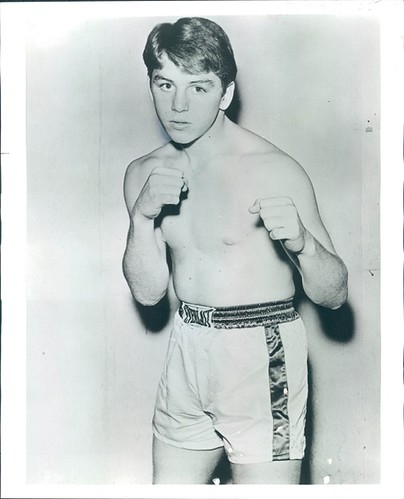 OT: The April 9 bout will mark the third time Pacquiao and Bradley have faced one another. Fortunately we can still see his training for previous fight with Tim here at the Manny Pacquiao Official Video Channel