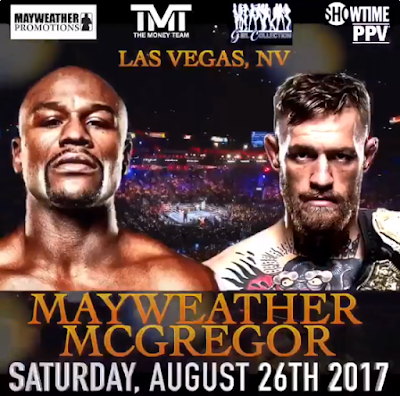 When I think of the upcoming fight between Floyd Mayweather Jr and Conor McGregor later this month I cannot help but be reminded of the ubiquitous quote by announcer Larry Merchant, “Boxing is the theater of the unexpected”.

The reasonable expectation, in this fight, is that Mayweather will win this fight easily and maybe by knockout. It's hard not to believe this. Mayweather is undefeated in his career as a boxer and McGregor is stepping into Mayweather's domain; the boxing ring, in which he is the undisputed master.

The unexpected, of course, is a McGregor victory. He has his fans and believers to be sure but almost to a man, boxing fans consider this fight a joke and a mismatch and I have to agree with them.

The caveat in this whole affair is Mayweather himself. When he steps into the ring on the 26th of this month, he will be 40 years old (McGregor is 29), and it will have been almost two years since he last fought (a unanimous decicion over a tired Andre Berto). So how are we to accurately gauge him? Maybe you can but I can't.

I personally give McGregor a snowball's chance in hell to win this fight, which is to say I give him no chance at all. If the fight were taking place in the cage I would feel the same way about Mayweather. I don't discount any man who comes to fight. I have to give him a measure of respect simply because he is a man and a fighter and champion in his own right. I respect the attempt and the effort.

History has played cruel tricks at times with boxing fans. Whenever we seem to find ourselves believing that someone cannot lose a fight, or someone cannot win a fight, the unexpected always happens. We bet the house and we lose.

So what am I saying? I'm saying I am absolutely sure that Mayweather will win this fight any kind of way. I just won't bet the house on it. (I'm not paying for it either)
By Randy De La O at August 09, 2017

Yep, Mayweather is most likely to win the fight. Now If the fight were a MMA fight, then the chance of Mayweather winning is a looooooot less. :)