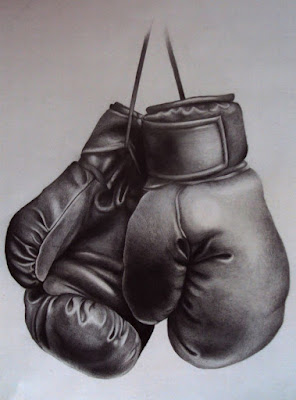 It never sits well with me whenever I hear someone call a fighter a coward. Almost to a “T”, most fighters that have made the long walk from the dressing room, to the ring, whether it be, professional boxing, amateur boxing, military, police or firefighters boxing, understand about respect. If you have made that walk into the ring you are deserving of respect. It's been earned.

When Oscar De La Hoya was fighting, he was often called De La Chicken. Floyd Mayweather has been called similarly ridiculous names, Gayweather being the most common. There may be a number of reasons to not like De la hoya and Mayweather, and other boxers but cowardice is not one of them.

It's no easy task to face another man in the ring because, despite the game face, and any and all bravado, a fighter still wonders. Yes, he is confident but still he wonders. No one knows what the outcome will be. A man, or a woman, is emotionally naked in the ring, for all the world to see. Not many have the kind of courage, at any level, to lace up the gloves, look the other guy in the eyes and then fight him. No easy task.

During a fight, someone will almost invariably say “Oh, that didn't hurt!”. I have news for you, they all hurt but you learn to push it aside. This is what you train for. At other times, again, someone will yell out “If it was me...... “ As if.

The worst of it, in my eyes, is to call someone who has trained hard, and dared to make that walk into the ring, whether he is a champion or someone making his debut, a coward. Years ago, Jerry Quarry was a color analyst for a fight, I cannot remember what fight it was. One of the announcers, again, I don't remember, made this statement as one of the fighters was stepping into the ring, “He has a bit of the dog in him!” In other words, he was a coward! To which Jerry snapped back, “No coward ever stepped into the ring.” Truer words were never said.

Years ago, my wife Jeri and I were going to see Julio Cesar Chavez and Oscar De La Hoya fight at Caesar’s Palace in Las Vegas, Nevada. About a week before the fight we went shopping for new clothes. We were in a men's clothing store when this young salesman, probably in his twenties was helping me and he eventually asked me (I'm paraphrasing) “Big event coming up?” No, we're going to the Chavez and De La Hoya fight."

I didn't get a chance to finish what I was saying because he immediately went on a rant about Oscar. My wife and I looked at each other because we both liked Oscar but I just kept quiet. We reached the cash register where a sales girl and an older salesman were standing. As he was ringing up my sale he continued with his rant. The two salespeople were rolling their eyes as he spoke. I ignored him until he said:

“Someone ought to kick his ass!”

It's not really that hard you know, all you have to do is find a gym, start training, win some fights and then challenge Oscar. It's not that hard really, …. if you've got the balls.

“Yeah, that's what I thought! Show some respect!”

Talk is cheap. If you think any fighter is a coward. Step up and find out for yourself. It's not that hard, really.
By Randy De La O at August 26, 2017

thanks for shearing this i learn a lot from your blog al mt fav Max Kellermanboxer teach me a lot..