Update on Panama by Louis Burke 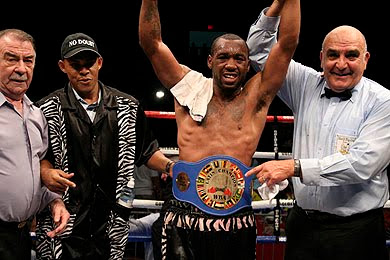 I just got into Monterrey, Mexico and settled in, in what will be another busy week with David Rodriguez, but what a great Saturday night for team Trout! Before I get into reviewing Austin’s fight. I’d like to apologize of not keeping everyone up to speed on what was going on with Austin.

First of all, on the way from the Panama airport to the hotel I left my lap top in the shuttle van and didn’t recover my lap top til the evening before the fights; I felt pretty damn lucky I was able to recover it. The hotel did provide a computer room but it was difficult to get on a computer, the wait was a long time and our schedule so hectic I wasn’t left with much time to wait in line. Again, sorry for leaving everyone hanging.

The fight with Tapia was a tough one, he’s a huge 154 pounder with a sledge hammer right. He was much faster, stronger and bigger than what he looked like in the previous fights we had seen on video. He comes from he same camp as 122 lb world champion Celestino Cabellero, which has a great team of trainers and some word class boxers.

Tapia came towards Austin for the first four rounds but after catching a few of Austin’s straight lefts, Tapia, started running and moving more, and he stopped trying to press the fight. I had Austin winning 3 of the first five rounds but they were close. Tapia, even though from Colombia, he lives and trains in Panama, so I wasn’t sure which way the rounds were going.

Once Tapia stopped moving forward we had to change up our game plane from counter-punching to cutting the ring off. This seemed to work better for Austin and he was able to get in control of the fight and won the next five rounds. His hand speed and punching in bunches gave him the edge, but because Austin stepped up his aggressiveness, he did get hit more than he usually does. As the fight progressed Austin was able to close the distance between him and Tapia, working him with combinations against the ropes.

Going into the 11th and final round, yes, you read right, 11 rounds, I’d never heard of that either. Something new the WBA is doing for non world titles. Because the first five rounds were close, and even thought I felt Austin won the majority of them, I felt we needed a strong finish. Despite trying to finish strong, I had Austin losing the last round, Tapia landed some big right hands, never hurting Austin but definitely giving him the round.

After the fight, I felt Austin clearly won all but 3 rounds, but I new there were some close ones and didn’t expect go be given anything close in Tapias adopted country. Even though I couldn’t hear the scores I new the first score announced was from the Panamanian judge who called the fight a draw, and the other two judges gave the fight to Austin, like I said I never heard the scores, but I did hear Austin’s name called out as the winner, giving him his second belt, the WBA Latino title to go along with his WBA Continetnal of Americas belt and giving him a number 3 ranking in the organization and possibly a shot at the world title in the near future.

The whole trip proved to be exciting, not only because Austin’s victory, but for the first time he met his Panamanian cousin Eugene, who explained to Austin his Panamanian lineage. Austin found out he’s cousins to the great Panamanian baseball player Rod Carew!

We also made some great friends that assisted in the corner. One was Rigoberto Garibaldi, "Gotti" as he’s known by his friends. He was a god send. He’s the son of world famous boxing trainer Hector Rocha, from New York, who happens to be good friends and neighbors with Austin’s Grandparents who live in Brooklyn. Gotti’s dad ask him to take care of us and he did, chauffeuring us around, getting my lap top back and letting us use his gym to train at, along with assisting us in the corner, a million thanks to a great person.

We also had Randy " Moose" Gomez assisting us in the corner. Moose is the bail bonds man that had to accompany Austin to Panama for his pending charges. Moose learned how to give water to a fighter, rinse a mouthpiece and grease Austin up. He did a great job and might have a future as a ring second, he also helped a ton and was great support.

Also in the corner was Otis "Big O" Johnson, Austin’s grandfather. This is the second trip he’s been on with us, Canada being the first. He’s a super guy and has a heart as big as he. Thanks Otis.


The victory, and the trip in general was an emotional one and very rewarding. Austin wants to send his supporters a personal thanks, and god bless all of you!
By Randy De La O at September 07, 2009