The Last Word On Arreola From Borges: "The Guy Can't Fight" 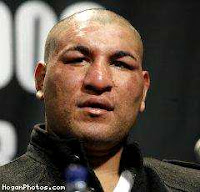 The writer wasn't impressed by Arreola's ability to withstand punishment or all that much by his tears postfight. He calls out the fighter and his team for match and the result.

Cristobal Arreola’s tears following the one-sided beating he absorbed from Vitali Klitchko last weekend were real but what was he crying about? He blew his chance long before the first bell rang.

These days the public is easily fooled by public displays of remorse, apologies which are really no more than public relations stunts or reactions to having finally been exposed than for really seeing the error of their ways. Cris Arreola seemed another in that growing list.

On the biggest night of his life, Arreola arrived at the arena fat and out of shape. Perhaps for him he was svelte, considering his past, but even at the weigh-in he joked about one of the most revealing things about him. When Arreola first weighed 271 there was little shock in the room but he removed his shirt to expose a weight belt he was wearing.

To him conditioning has always been a joke and so it remained. His chest was loose, his sides flabby and his skills non-existent. If you think the former is not revealing of why the latter is a fact than you are not paying much attention to things.

Arreola said in a pre-fight interview that he fought hard, worked hard and played hard. Two out of three isn’t bad unless you want to be heavyweight champion. Cris Arreola not only doesn’t work hard at his craft he doesn’t even know what that means, which is not all his own fault.

If on the biggest night of your professional career, you cannot see fit to work hard enough to be in the best of physical condition what chance do you think there is that he’s working on his footwork in the living room while friends, family and, most importantly, opponents sleep?

Arreola came off as a guy who thinks he has the right to overeat and over drink because he parties as hard as he fights. Well, if last Saturday night was an example of how hard he fights and he brings that to the dinner table or the bar room he should be Juan Manuel Lopez’s size by his next fight.

He didn’t fight hard nor did he fight well. He took punches in the face, which is neither of those things. There is an old saying in boxing that some guys are “game quitters.’’ What it means is they are willing to absorb punishment but not willing to do all they can to win.

If after a long amateur career and 27 professional fights what Arreola showed Saturday night is the sum total of his mastery of boxing than it’s time to look for a job in the Post Office. The guy can’t fight. Frankly, neither can Vitali Klitschko but what he can and does do is physically prepare himself as perfectly as he can and then use the advantages of size and limited athleticism to the best of his ability.

Were Klitschko in the ring with someone like Joe Frazier last Saturday night, Frazier would have slipped under one or more of those pawing punches that pass for a jab, and launched a left hook into his squash that would have knocked him out for a 20-count. Arreola couldn’t even catch up with him let alone hit him and this is against a guy who backs straight up in retreat, his hands down by his pockets.

Arreola was in dreadful physical condition but more importantly he was someone who couldn’t possibly have put in enough hours to master the craft of boxing because if you won’t run hard or do enough sit-ups and other conditioning to at least look as fit as Riddick Bowe in his prime don’t tell me about how hard you’ve been working on your boxing skills.

Bernard Hopkins spoke to this point a week before the fight, lumping Arreola in with so many other young fighters who are pushed along by managers and promoters into fights they are ill prepared for. They are aided and abetted in committing a fraud upon the public and, worse, themselves by trainers who either don’t know how to teach a young fighter or have no interest in risking their employment by making clear to him he isn’t working had enough nor learning fast enough to compete at boxing’s most intense levels.

So, again, what was he crying about? Most observers felt these were tears of remorse for having failed in his effort after long years of working to reach this moment. Well, had he worked as hard as he could that would be both noble and understandable.

But take one hard look at Arreola not through the rose-colored glasses of his supporters or media advocates who should have known better but through the hard eyes of one who goes by what he sees not what he wishes. Cristobal Arreola may be a hale fellow but he is not a student of boxing.

He refused to put in the time to train his body adequately to look like a heavyweight but far more importantly the larger message is he didn’t put in the time to learn his trade. Boxing is a difficult work place, arguably the most difficult and demanding in sports. Even its greatest practitioners eventually pay a price of pain and loss. But if they have done all they can there’s nothing really to cry about except, perhaps, lost opportunity.

There was no shame in Cristobal Arreola’s tears. They at least show on the night of the fight he cared. The shame is that he didn’t care enough when it counted most, which was in the long months and years that led him to the Staples Center in Los Angeles and an appointment with someone who is not a great heavyweight by any measure but who is a professional.

This day and age, that alone can win you a lot of fights, especially in the heavyweight division.

Maybe...but rating boxers for their physiques is sorta newage(remember...George Foreman...did Danny Lopez have a muscle in his entire body?);Klitchko is painful to watch-and he's lucky to be 6'7...and I'm hoping Arreola kicks James Toney's fat ass.