Mayweather vs Cotto and Alvarez vs Mosley

There were no real surprises during Saturday night's fight between Saul “Canelo” Alvarez and Sugar Shane Mosley. Not that I wasn't hoping for Mosley to pull the rabbit out of the hat one more time, as he did in his fight with Antonio Margarito back in 2009. Alvarez, was just too young and too strong. Mosley, ever the warrior had nothing left in the tank but heart and courage and he never stopped trying. 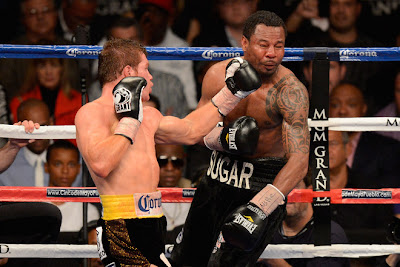 Despite winning the fight hands down over Mosley, Canelo seemed almost passive at times. There were times in the fight where it seemed if he would have opened up with a long sustained barrage of punches he might have dropped or stopped Mosley. Maybe it was just hard to reconcile fighting one of his boyhood idols. Just Speculating on that.

Far be it for me to presume to tell any man when to retire, that's a private decision between him and his family, still as a fan of the sport of boxing and as a long time fan of Mosley, I can't help but hope that he fought his last fight Saturday. At times it was painful to watch, as it always is when a fighter reaches the end.

In his last four fights, Mosley has lost to Floyd Mayweather Jr, Manny Pacquiao and now Saul Alvarez. He also earned a lackluster draw with Sergio Mora at the staples Center in Los Angeles. There is nowhere else to go and nothing left to prove. Personally, I believe the Mosley of , say, 1999, could have won any of those fights but that Sugar Shane Mosley no longer exists. There is no shame in growing older. It's out of our control. The shame comes later when a fighter cannot or will not come to terms with his age or the loss of his skills and reflexes, and suffers needless damage. Here' hoping that the great and much loved Sugar Shane Mosley, escapes that trap.

Alvarez on the other hand is still an ongoing work in process. Despite his unanimous win over Mosley, Canelo, strong and confident, still needs a lot of work and experience before he faces the likes of Floyd Mayweather Jr or Manny Pacquiao.


The fight between Floyd Mayweather Jr and Miguel Cotto has given me a new found respect for both fighters. We always knew that Cotto was a proven warrior but he gave Mayweather a much better fight than any of us thought he would. Mayweather won that fight, there's no argument there, but Cotto made Floyd work harder than anyone else has to date. Mayweather, bloodied and bruised, was forced to fight, and he did. The fight itself, while exciting, was not so much a great fight as much as a damned good one but it did give us a glimpse into the character of both fighters. I enjoyed the fight.

So did Mayweather change his style for this fight because at 34 he is finally slowing down? Or because, as he says, he wanted to give the fans their money's worth? So did Cotto really up his game for Mayweather? Hard to tell right now.

So we are still left with the question “What about Mayweather vs Pacquiao?” No one has the answer.
By Randy De La O at May 06, 2012

It was actually a good fight for both boxers. I thought Cotto was winning the middle rounds of the fight because of his perfectly timed jabs, but I guess Mayweather’s sensational defense pulled through at the end. Yes, Cotto was landing punches, but not as consistently as Mayweather was.

Cotto and Mayweather's fight are great. They made a good performance during that time and I thought Cotto will the first boxer who will give Mayweather's first lost, but not.