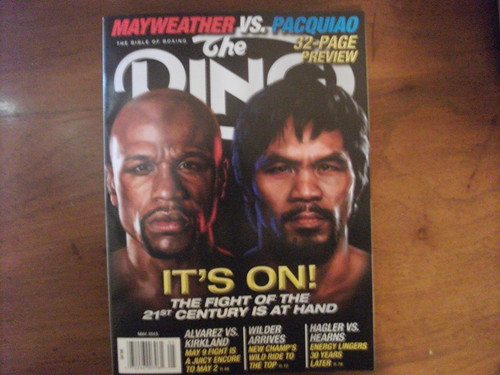 I stopped at the market this morning to pick up a few things for breakfast. I also picked up the latest Ring Magazine - with Floyd and Manny on the cover. The cashier lady and the bag girl (is that what they're called?) both started talking about the fight. The bag girl asked me who I thought was going to win. I was surprised at their interest.

In case you've been on vacation on some remote island or living under a rock somewhere, Floyd Mayweather and Manny Pacquiao will be settling matters on May 2nd. I remain skeptical -hopeful but skeptical - and will remain so until the bell sounds for the first round.

In answer to the bag girl's question, I said, matter of factly, "Mayweather". She immediately took up the cause for Manny Pacquiao. Again, I was surprised at her interest. On the other hand I was not surprised at her sentiment. it seems the majority of fight fans, much of the boxing world and even bag girls, collectively, want to see Pacquiao give Mayweather a good old fashioned ass whuppin'.

What she said next really surprised me. "Yeah, but isn't Pacquiao a southpaw?" This from the bag girl? Now to be honest with you I did not want to spend the morning discussing boxing with the bag girl. Breakfast was waiting and I was hungry but I answered her anyways. "Doesn't matter. Mayweather has more than enough experience and he has never lost a fight up to this point. Pacquiao has lost (going on memory here) at least four times". "But" I said, "It's a fight, anything can happen!" She thought about it for a second, "True!" I grabbed my groceries and left.

That about sums up my feelings about the fight. Anything can happen but I'm going with what I do know. I know that Pacquiao has lost before. That might mean absolutely nothing or it may mean everything. Two things can happen when the going gets tough, Pacquiao can dig down deep and refuse to ever lose again or having lost before he may remember, that losing wasn't all that bad after all. It's been proven that Pacquiao can be beaten and by men that were presumably not quite as good as Mayweather.

Mayweather, despite the prevailing notion that he has dodged or evaded good fighters, has fought the best, as has Pacquiao, (they have several common opponents). He has always found a way to win. I don't think at this point he will be able to handle the “shame” of losing to Pacquiao. I think he will do whatever it takes to keep that from happening. Over the long haul of a fight, Mayweather's concern is never the fans. He may win ugly but he will win. Now, you and I know there is no shame in losing a hard fought fight but Mayweather doesn't know this. His ego will push him and It's almost always true that styles make fights. On the surface Mayweather has the correct style to beat Pacquiao; hand speed and accurate and clean crisp counterpunching. It will remain to be seen if he has the will as well. I expect to see Mayweather win a unanimous decision on May 2nd.

Gotta go, breakfast is ready!  As always, may the best man win!

why do we fall - Muhammad Ali The Greatest of all Time