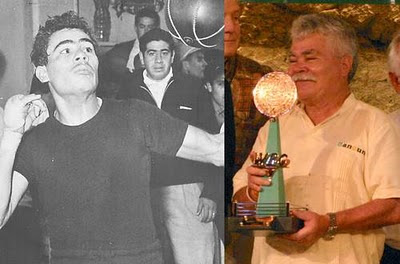 Photo Courtesy of La Jornada
Efren "Alacran" Torres has passed away. Torres, 66, died in his hometown of Guadalajara, Mexico. Torres won the WBC Flyweight Championship from Chartchai Chionoi of Thailand, on February 23, 1969 in Mexico City. Our condolences to his family, friends and many fans.

Former WBC Lightweight champion a longtime friend and stablemate of Torres had this to say:

"Today has been a sad day for my hometown Guadalajara and for the whole country of Mexico.
My friend and stablemate Efren "Alacran" Torres died this morning. He and I started training on the same day at the Police Station in the City of San Andres, about twenty miles south of downtown Guadalajara in July of 1959. My cousin, Jose Becerra taught us both the left hook to the liver and all the classic boxing moves he knew. What he taught us was enough for me and Alacran Torres to start winning fights. The two of us were racing to see who could win more knockouts in a row.

In my opinion Alacran was one of the best Flyweight World Champions that Mexico has ever had.
Perhaps many of you remember his fights against Susumu Hanagata and Chartchai Chionoi. Those were outstanding fights. Fights like that you don't see anymore.

I just saw Alacran Torres in Guadalajara in November, 2009 where they placed our pictures and a star in the beautiful sports museum. He was so happy and seemed to be in good shape. He was just a little older than me. May God rest his soul.".... Roldolfo "El Gato" Gonzalez

Email ThisBlogThis!Share to TwitterShare to FacebookShare to Pinterest
Labels: Obituary